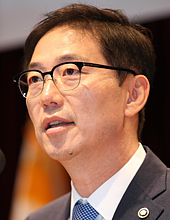 President Moon Jae-in’s pick of a veteran negotiator on inter-Korean affairs, Chun Hae-sung, as vice unification minister last Wednesday indicates that his Pyongyang policy will be nothing like the hard-line one implemented by former President Park Geun-hye, under which North Korean denuclearization was a prerequisite for any dialogue.

It’s been 10 months since Chun left the Ministry of Unification, which handles inter-Korean affairs, in July 2016, and since then, he has been working as head of the South-North Korea Exchanges and Cooperation Support Association, which researches North Korea policy. But why he left remains a mystery.

Chun was appointed to the position of National Security Council secretariat in February 2014 under the conservative Park administration but was let go merely eight days later. The presidential office at the time said they were rescinding his appointment because he was “a core member of the Unification Ministry” and therefore needed to stay there.

Some speculated he may have been kicked out due to his liberal views, but when asked by reporters Thursday, Chun refused to talk about his days in the Blue House.

Upon his return to the ministry, he headed the Office of Inter-Korean Dialogue and Unification Policy Office. When he left the ministry again last year to work for the South-North Korea Exchanges and Cooperation Support Association, many assumed he was sidelined.

In his inauguration speech Thursday at the Central Government Complex in Gwanghwamun, Chun said his team’s “vital mission” under the Moon administration will be to normalize inter-Korean relations and bring about a peaceful unification. Chun called on everyone at the ministry to rethink their roles, adding there were “requests from within and without” for the ministry to be more proactive.

“We’re adding sanctions and pressure [to North Korea] right now,” Chun said, “but because we can’t solve anything with only that, I think, if necessary, it’s right for us to try dialogue.”

Chun said his role at the South-North Korea Exchanges and Cooperation Support Association enabled him to observe the ministry’s work more objectively, but he did not specify which areas he thought needed improvement. “As vice minister,” he said, “I’ll see if I can apply [ those thoughts] one at a time.”

During the 2014 Incheon Asian Games, Chun was involved in talks with Hwang Pyong-so, vice marshal of the Korean People’s Army; Choe Ryong-hae, a member of the Workers’ Party’s Politburo; and Kim Yang-gon, director of the party’s United Front Department, who all attended the games.