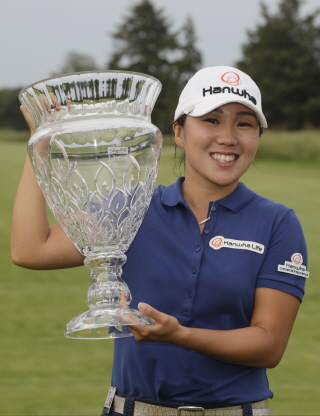 Korean Kim In-kyung has won for the fifth time in her LPGA career.

Kim is the seventh different Korean winner on the tour this year in 13 starts. The LPGA has yet to see a multiple champion so far in 2017, and Nordqvist, who won in Arizona in mid-March, came up short in her bid to become the first.'
Kim, world No. 30, won a tournament in each of the 2008, 2009 and 2010 seasons. She then endured a long dry spell before breaking through in October last year. She's projected to rise to No. 22 in the next world rankings.

The 28-year-old had just played five tournaments prior to this one in 2017 and missed two cuts with zero top-10s. This was Kim's first LPGA win in the United States since 2009, for her two previous wins had come in Mexico and China.

"I feel really pleased with how I played today," Kim said at her post-tournament press conference. "It was really tricky out there, but I gave my best. I think the short game has been really a big help."
Kim started the final round tied at the top with Paula Creamer at nine-under. Kim went out in one-under 36 to open a one-stroke lead, with Nordquivst lurking at eight-under at the turn.

Kim enjoyed a two-shot swing at the 10th with her birdie and Creamer's bogey. Creamer then committed another bogey at the 11th to fall further out of contention, but Nordquivst birdied both the 10th and 11th holes to reach 10-under, one behind Kim.

Playing in a group ahead of Kim, Nordquivst managed three straight pars to close out her round, including a two-putt par at the par-five 18th.

Kim also parred the rest of her way after the bogey at the 14th to close out a two-shot win.

Kim revealed after Saturday's round that she'd suffered an off-season injury that limited her early this season. She fell down a flight of stairs and bruised her tailbone, but Kim said it turned out to be a blessing in disguise.

"It actually helped me work on my upper body, while I couldn't work on my lower body," she said. "I'm really happy to come back stronger than I was before. I couldn't have done it without all my trainer's support."