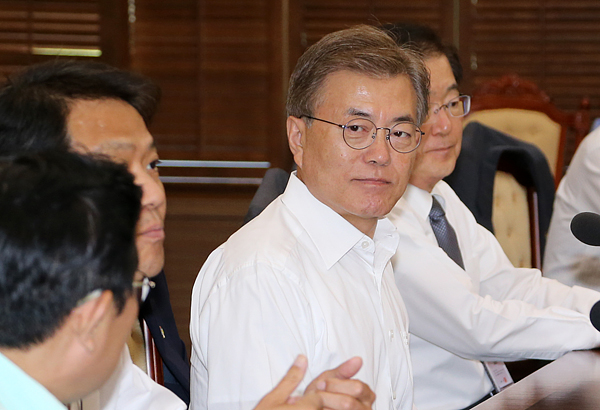 Former President Roh Moo-hyun often found himself in the hot seat because of what he’s said. His policy chief Kim Byung-joon recalled in his book “Presidential Power” that Roh invited political veterans to the Blue House for a meal. The guests advised the president to hear out his critics more and talk less. Roh said he had heard that often but found it difficult to hold his tongue.

The dinner ended awkwardly. The Roh administration tried to dump the authoritarian heritage of our presidents more than any of his predecessors. He had been hitherto considered the most humble president. Yet he too must not have liked hearing criticism.

President Moon Jae-in is not out to be a replica of Roh. But an administration headed by Roh’s chief of staff with an army of his supporters inevitably cannot be entirely free from the Roh legacy. It is why the people are as much concerned about the risks from the sense of moral superiority and exclusivity as pinning their hopes on the new administration.

In a recent poll by Gallup Korea, Moon’s approval rate was 84 percent, the highest for a Korean president. Moon hit the nail where people hurt most and what they wished to see from the state. The people were relieved to see him return to the Blue House as its leader.

But there is always a shadow in the light. The new president must stop and contemplate at a time when his popularity is at its peak. He must first shake off the obsession to be good.

When he visited the Incheon International Airport Corp., he promised to put every member of the so-called irregular workforce in the public sector on the permanent payroll. He commanded a shutdown to aged fossil-fueled power stations to combat fine dust pollution. He opened some of the dams along the four major rivers to resolve algae blooming. He told his administration to draw up an extra 11 trillion won ($9.84 billion) to create jobs. All of those were popular moves aimed at addressing past ills.

It would be great if problems could go away with good intentions. But the reality is not that simple. If the government wants to do away with disadvantaged irregular jobs, it should make it a law. If coal-fueled power stations are stopped, how can the state keep up with the power supply? It would have to raise electricity rates. The people would be happy to close down carbon-emitting power stations and safety-risk nuclear reactors, but they won’t like bigger utility bills.

Before opening the dam gates to let the water out, he should have sought public opinion first. It is extremely dry season. The economy grew by more than 1 percent for the first time in 18 months in the first quarter. There is lesser justice to create an extra budget.

Moon’s government is not for the liberal front alone. It was born by citizens who filled the streets every weekend for months with candlelights in their hands. Those wishing to see improvements in civilian rights beyond liberal and conservative leanings voted for him. The fence between the liberals and conservatives can be easily overcome.

Moon is not ignorant of the public’s wishes. At the memorial service for Roh, he said, “My dream is to become a president for all the people in this country. I want to create a new Korea and pass beyond the Roh government.”

He would earn the hearts of the pubic by paying heed to the opposition voices. The new administration should be complimented for its willful and eager start. But it must not become self-indulgent because of the cheers. The public wants the president to hear them more than hearing him. Wisdom is bred by listening to others. Ears would guide the way for coexistence and co-prosperity.

*The author is the economic news editor of the JoongAng Ilbo.