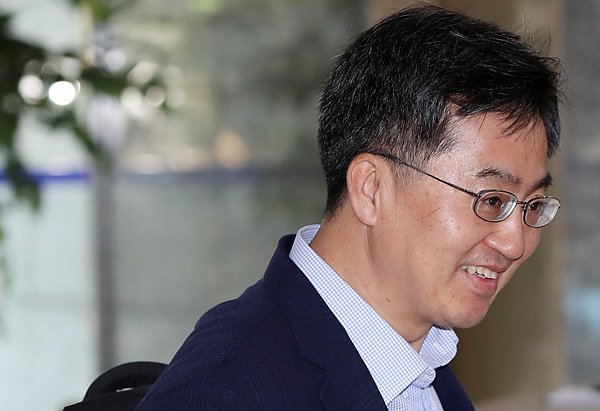 Korea has some room for a tax increase in the future, the finance minister nominee said Monday, lending support to the government’s expansionary fiscal policies to create jobs and boost the economy.

“Korea can afford a tax increase, as it has a lower ratio of tax burden to the gross domestic product (GDP) than other member countries of the Organization for Economic Cooperation and Development (OECD),” incoming Finance Minister Kim Dong-yeon said in a report to the parliament before his confirmation hearing Wednesday. “But I think it should be more prudent to actually increase the tax rates at large.”

On the campaign trail, President Moon Jae-in promised to focus on job creation and expanding welfare for young people. In particular, he said his government will create 800,000 public jobs during his five-year term, grant an allowance to young job seekers and offer public residences to newlyweds at lower rents.

He hinted at a hike in corporate and income taxes, and a removal of exemptions and benefits.

As a first step, his government drew up an 11.2 trillion-won ($10 billion) budget Monday for new jobs and subsidies for young job seekers.

For corporate taxes, the finance minister nominee said he will not increase the rate immediately. “I will try to reduce corporate tax-cut benefits and raise effective tax rates in the first place,” he said. “A careful approach is needed in terms of increasing corporate taxes.”

Currently, Korea imposes a 22 percent corporate tax on companies that post taxable earnings of more than 20 billion won, with 20 percent for firms with 200 million won to 20 billion won in earnings.