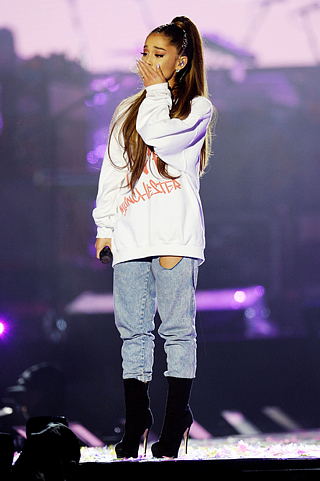 MANCHESTER, England - Ariana Grande paid tribute to the city of Manchester, England, on Sunday with an energetic, all-star concert that raised millions for victims of a suicide bombing that tore through her last performance in the city nearly two weeks ago.

Grande was emotional and teary-eyed throughout the One Love Manchester concert Sunday, which the British Red Cross said it raised more than ￡10 million ($13 million) for the We Love Manchester Emergency Fund, created for those affected by the May 22 attack.

She closed the three-hour-plus event with a cover of “Over the Rainbow,” crying onstage at the song’s end as the audience cheered her on.

“Manchester, I love you with all of my heart,” Grande said before the performance, and just after singing “One Last Time” with Miley Cyrus, Pharrell and more of the show’s performers standing behind her in solidarity.

Liam Gallagher, formerly of Oasis, earned loud cheers from the audience as he emerged in his home town in surprise form. He sang and offered encouraging words to the crowd, who held inspirational signs in their hands.

One of the most powerful moments was when the Parrs Wood High School Choir performed Grande’s “My Everything” with the singer. The 23-year-old pop star held the young lead performer’s hand, both with tears in their eyes, as the rest of the singers joined in. AP