Shipbuilders get a lift from Russia

Shipbuilders get a lift from Russia 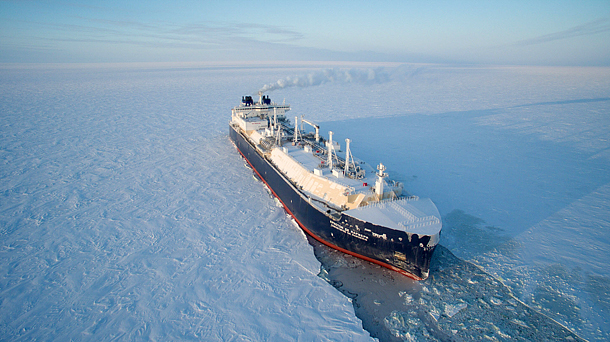 Korean shipbuilding industry is exiting a dry spell of a lack of orders as demand from Russia rises.

Daewoo Shipbuilding and Marine Engineering (DSME), a debt-ridden shipbuilder that recently received another lifeline to stay afloat, held an event on Saturday in St. Petersburg, Russia, to name the ice-breaking liquefied natural gas (LNG) tanker it delivered in March. The tanker commissioned by Russian maritime shipper Sovcomflot is the first of its kind and a part of Russia’s Yamal LNG project. The project takes place at Yamal plant, Russia’s second largest LNG site at Sabetta port in Yamal Peninsula. It is expected to produce 16.5 million tons of liquefied natural gas per year and the plant is to start operations by the end of this year. Russia will deliver the extracted gas to Asia and Western Europe through the Northeast Passage.

The delivery of the gas through the frozen passage requires tankers topped with ice-breaking capacity, which is why DSME’s ships are essential to the success of the project. President Vladamir Putin also attended Saturday’s event, demonstrating how important the ship is to Russia and the project.

Putin reportedly said that the Yamal project has opened the “possibility of Northern Passage” and that it will contribute in development of global energy industry. The DSME-made LNG tanker was named “Christophe de Margerie” after the late chairman of French oil company Total S.A. Margerie played a crucial role in creating a joint venture between France and Russia but died in 2014 in an airplane crash. Total S.A. owns 20 percent of the project.

The tanker is capable of sailing through ice as thick as 2.1 meters (7 feet) while carrying some 173,600 cubic meters of liquefied natural gas. Aside from the one delivered in March, the Geoje-based shipbuilder will supply additional 14 tankers by 2020. The entire contract of engineering 15 ice-breaking LNG tankers is worth $4.8 billion. Jung Sung-leep, the chief executive of DSME, said, “Based on the know-how accumulated in building the first tanker, we will increase the quality of the remaining 14 ships…to help the normalization of the company and to gain trust of our customers.”

DSME is not the only beneficiary of the rising demand from Russia.

Hyundai Samho Heavy Industries, an affiliate of Hyundai Heavy Industries (HHI), said Sunday that it signed a deal to establish a joint venture with Russian shipyard Zvezda Shipbuilding in St. Petersburg. The two companies will build shipbuilding company Zvezda-Hyundai in which Hyundai Samho will own a 49 percent stake. Samho signed a technical support agreement with Zvezda and will transfer the necessary technological expertise to build 80,000- to 110,000-ton oil tankers. The construction of the tankers will begin next year. “Through the establishment of Zvezda-Hyundai and the new technical support agreement, we have acquired a new source of revenue,” said a spokesperson for Hyundai Samho. “We also expect to gain more business opportunities in Russia.”

Russia owns the largest liquefied natural gas reserves in the world and is in constant need of tankers to ship the gas worldwide. Korea is an ideal partner for the business for its geographical location and competitiveness in shipbuilding.