Ultra Korea highlights breadth of electronic music : The massive festival, now in its sixth year, is bigger than ever

Ultra Korea highlights breadth of electronic music : The massive festival, now in its sixth year, is bigger than ever

For many years, the go-to summer festivals in Korea were centered around rock music. But recently, festivalgoers seem to have outgrown their passion for rock music and have begun gravitating towards the excitement of electronic dance music (EDM) festivals.

Certainly, the biggest EDM craze can be witnessed at the Ultra Music Festival (UMF) in Miami that started in 1999. The Korean version of the festival began six years ago and has grown rapidly, even surprising big name DJs unprepared for the massive response they receive from Korean fans.

“The EDM fans in Korea are so enthusiastic that artists who have performed at the festival in the past all say that they were really taken aback,” said Richard Jung, head of UC Korea, the production company that brought the Miami festival to Korea six years ago.

Jung realized early on that the beats of electronic music would appeal to Koreans who “know how to party” and flew to Miami to visit the festival headquarters.

“I talked to them about how Korea is quick to adapt to different kinds of music and the potential it has as a rapidly growing market,” said Jung, adding that he’s happy that Ultra Korea has grown each of the last five years, with last year’s festival attracting about 150,000 people. This year’s festival kicks off at the Jamsil Sports Complex in southern Seoul for two days on June 10 and 11.

After witnessing the success of the Korean edition, UMF has added more countries in Asia to host their own festivals including Ultra Japan in 2014, and Ultra Singapore in 2015. Ultra China will also join the bandwagon and host its first event in September.

“Korea acted as the bridge to help UMF stably open in other Asian countries hoping to expand audiences of the genre across the globe,” said an official at UC Korea.

This year’s festival line up has been created to show off the diverse subgenres and styles of EDM. 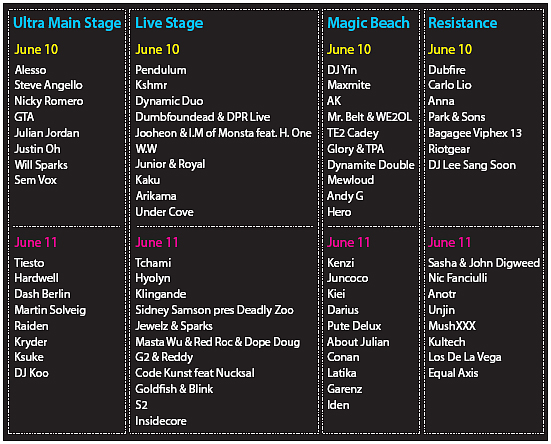 The festival is “not just for avid fans who [are knowledgeable] about specific EDM styles, but also to show new comers that there’s more to EDM than ear-splitting electro beats. We have included one more stage, called the Resistance,” said Jung. “Here, visitors will get to hear the diversity.”

According to Jung, this year’s festival will also invite pop and street artists including the famous Brazilian neo-pop artist Romero Britto, as well as Clifford Johnson, Dasic Fernandez, Jordan Betten and others, who will showcase their artwork alongside the music.

“Music festivals are evolving each day and we believe that we don’t have to limit it to just music and just one specific genre,” Jung explained adding that Ultra Korea will try to embrace diverse content year after year.

Tickets can still be purchased at the festival’s website (umfkorea.com/tickets) or through Hana Ticket (www.hanaticket.com). One-day tickets cost 150,000 won ($134) each. Doors open at 11 a.m. and the official festival begins at 1 p.m.