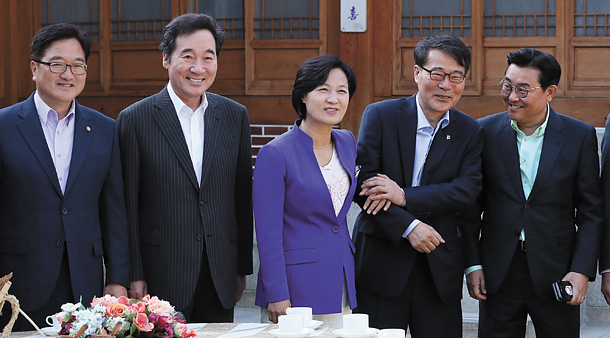 President Moon Jae-in’s plan to restructure the government is taking shape as senior administration officials and the ruling party agreed Monday to create a new ministry that will support small businesses and start-ups.

During a morning meeting at the prime minister’s residence, the first consultation on the subject of government reorganization, top officials from the presidential office and the Democratic Party agreed to pass a bill to restructure the government during this month’s legislative session.

“We agreed to minimize the changes in order to stabilize state affairs and resolve urgent issues first,” Rep. Kim Tae-nyeon, chief policy maker for the Democratic Party, said after the meeting.

Moon took office on May 10, just a day after a snap presidential election triggered by the removal of President Park Geun-hye from office. One of his key campaign promises was to create a ministry to support small and medium-size companies and start-ups. The change is largely to support Moon’s pledge to create jobs.

The administration plans to turn the current Small and Medium Business Administration into a new ministry by transferring departments dealing with small businesses and start-ups from the Ministry of Trade, Industry and Energy; Ministry of Science, ICT and Future Planning; and the Financial Services Commission.

The government and the ruling party also decided to establish a new bureau in the Ministry of Trade, Industry and Energy that will solely handle trade negotiations. The head of the new bureau will have the title of “trade minister,” though the position is a vice-ministerial post.

A so-called science and technology innovation headquarters will fall under the purview of the Ministry of Science, ICT and Future Planning. The team will be led by a vice-minister-level official and oversee the general direction of Moon’s science and technology policies, budgets for research and development and evaluation of accomplishments.

The Ministry of Public Safety and Security, created by Moon’s predecessor Park in the aftermath of the government’s botched rescue operation of the Sewol ferry when it sank in April 2014, will be dismantled. The Central Fire Service and Korea Coast Guard will be separated from the ministry and become independent institutions. The ministry’s disaster control operations will be merged into overlapping departments in the Ministry of the Interior to become the Ministry of the Interior and Public Safety.

The head of the Ministry of Patriots and Veterans Affairs, currently a vice-minister-level official, will be elevated to minister. Moon last month appointed Pi Woo-jin to be minister.

Throughout his campaign, Moon promised to be a president who would be easily approachable to the public. He pledged to dismantle the Presidential Security Service and allow the National Police Agency to be in charge of presidential protection.

Kim said ruling party lawmakers would sponsor a bill to restructure the government this week.

“Because the plan is not contentious, I believe opposition parties will cooperate with the passage,” he said.