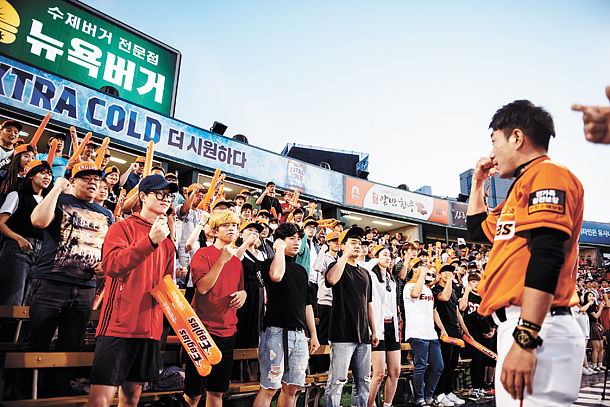 During the Hanwha Eagles’ game against the SK Wyverns at Daejeon Hanbat Baseball Stadium on Saturday, Sung Min-gook walked up to the mound to make a ceremonial first pitch while his father, Sung Baek-chul, signed to him.

“Min-gook never played baseball before,” said Park Young-jin, executive officer of the Korean Hearing Impaired Baseball Association. “But he is very proud of his father playing for Daejeon Deaf Eagles. Due to the creation of baseball sign language, the two enjoy talking about baseball.”

In professional baseball, players tend to create their own sign language and use signs rather than screaming across the field. Still, of a total of 250,000 hearing impaired people in Korea, only 180 people play for 12 hearing impaired baseball teams.

Of a total of 24,792 signs registered with the National Institute of Korean Language, there are only three baseball terms - home run, safe and out.

Since there isn’t any standard sign language for baseball, hearing impaired people have difficulty watching baseball or playing baseball.

Since October 2016, the Eagles took the first step in making improvements to sign language through “the biggest voice” project.

“We thought that’s what the Eagles had to do to have more people enjoy watching baseball,” Kim Shin-yeon, president of the Eagles, said. “Through the biggest voice, we wanted hearing impaired people to enjoy baseball.”

Over the past six months, the Eagles and experts gathered to make 135 signs that are necessary in baseball. On Saturday, Deaf Awareness Day, the Eagles invited 300 hearing impaired people to watch a game with signs provided. In the bottom of the eighth, the 13,000 Eagles’ fans skipped their famous cheer song and instead cheered only using sign language.

Aside from increased involvement, “the biggest voice” project also showed that professional baseball is not all about winning and selling products, but also about inclusion and community.

The project showed great involvement by the community as it exceeded the projected fundraising goal of three million won within five days, collected 50 million won ($44,670).