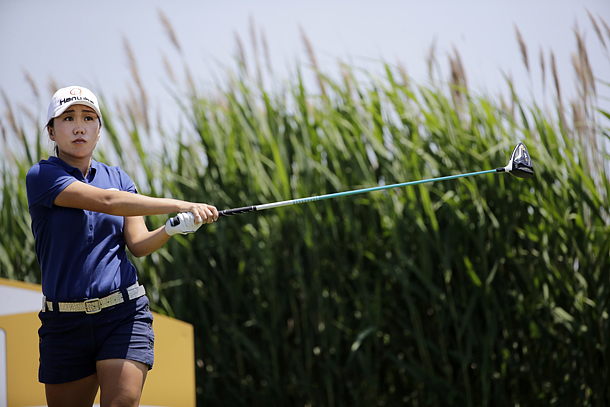 Kim In-kyung watches her shot during the final round of the ShopRite LPGA Classic on Sunday at Stockton Seaview Hotel and Golf Club’s Bay course in Galloway Township, New Jersey. [JOONGANG PHOTO] 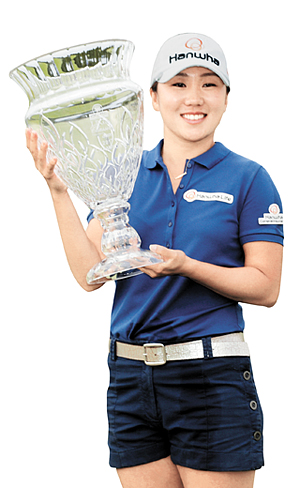 Despite high wind on the final round and Anna Nordqvist closely chasing after her until the 11th hole, Kim managed to shoot two under-par to lift up the trophy. Looking at her final round, Kim had a total of 27 putts.

“I really didn’t expect [to win] right away, but I knew my game was better than last year,” Kim said after the round, as quoted on LPGA. “My trainer, my coach, they had to change so many plans for me because so many things happened last winter. But I just feel so good and I feel all the support.”

“Just having the honor to back-to-back defend is quite amazing,” Nordqvist said after the round, as quoted on LPGA.

Meanwhile, Ryu So-yeon, the third-ranked player in the world, missed a cut for the first time since the 2014 Reignwod Classic, 64 events. 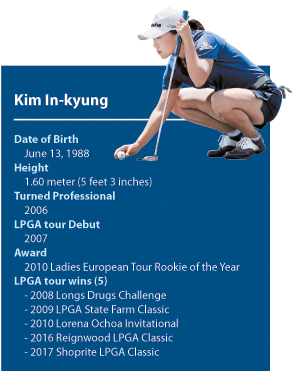 After winning, she said hello to her father, who was in Korea, through the TV camera. For Kim, her father was the first one who came to Kim’s mind when she won.

As her father recently injured his back and his ankle, they were only able to communicate through social media.

“In-kyung seemed relaxed throughout the tournament,” Kim Chul-jin, Kim’s father, said. “Now, I don’t need to be nervous anymore when I watch her play.”

Kim got off to a great start, winning at least one tournament a year since the 2008 season. But that lasted only until the 2012 Kraft Nabisco Championship, the first major tournament of the season, where she finished runner-up by missing a 30 centimeter (one foot) putt.

Heading into the final hole, Kim held a one-shot lead over Yoo Sun-young and all she needed was to make that putt. But she missed it and lost to Yoo on the first playoff hole.

With Kim’s victory at the Reignwood LPGA Classic in China in October 2016, it seemed as if Kim got herself out of the slump, but her bad luck continued. Prior to the Lorena Ochoa Invitational in November 2016, she suffered from food poisoning, which led Kim to withdraw from the event.

In December, she injured her tailbone and left arm after a fall. Kim spent her winter rehabilitating and started her season in March.

“After injuries, I learned the importance of taking care of my body,” Kim said. “Through rehabilitation training, my upper body got stronger.”

Of the five tournaments Kim played in, being tied for 16th at the Lotte Championship was Kim’s best finish for the 2017 season.

Then Kim decided to take a month off prior to the ShopRite Classic. During that time, she gained stability and found a new caddie.

With Kim’s victory, Korean golfers continue to dominate the LPGA tour, with seven of the 13 winners this season.

Up next, the Manulife LPGA Classic at Cambridge in Ontario, Canada, will resume on Thursday.