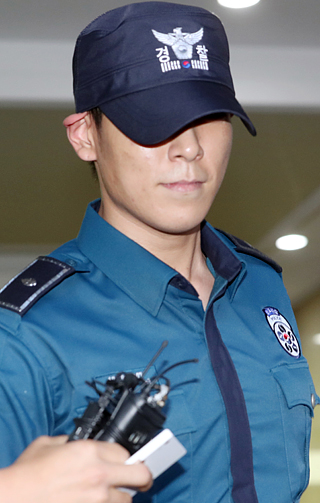 Rapper T.O.P (Choi Seung-hyun) of Big Bang who is currently under investigation for marijuana use, fell into critical condition after being found unconscious, presumably due to drug overdose.

Early yesterday, the rapper, who is currently serving his substitute mandatory military service in a subdivision of the Seoul Metropolitan Police Agency, was found unconscious at the station and was taken to a hospital. He was transferred to the intensive care unit around 5 p.m., but has failed to regain his consciousness as of yesterday evening.

Choi’s agency, YG Entertainment, told Ilgan Sports, affiliate of the Korea JoongAng Daily, yesterday that “[T.O.P] is currently hospitalized. We are still looking into the matter, and the results of the examinations are not in yet.”

A source close to Choi also told JoongAng Ilbo, that, “The examinations are still ongoing, but we are currently speculating that it was a drug overdose. He was stressed out due to the many controversies that have emerged recently. I hope he wakes up.”

Choi’s mother is also reportedly in the hospital with the unconscious rapper.

Choi is currently under investigation for smoking marijuana four times with a friend last October. He has admitted to using the illegal drug.