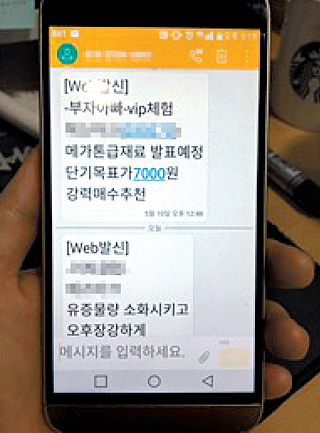 When he called the number, no one answered.

The message turned out be from a scammer hoping to raise the price of the stock by encouraging buys. Other investors have been receiving similar tips with even bolder assertions.

One man surnamed Choi received a message last Friday that suggested a company was about to reveal a 350 billion won ($310 million) deal and said the stock price would reach as high as 14,000 won.

It’s the old “pump and dump” scheme, a form of microcap stock fraud aimed at artificially inflating the price of certain shares through false hype. Positive messages about a stock are sent to a number of investors with the hope that they will buy and increase demand. When the price picks up, the scammers then sell their shares, causing victims to lose their money.

The targeted companies complain the text messages are ruining their reputation. Mr. Lim, who serves as an investor relations director at an affected company, was informed that spammers had taken aim at his Kosdaq-listed firm. The unsolicited messages said the company had “hidden favorable events” and that “large demand” was expected.

As soon as Lim learned the news, he issued an announcement that the information was untrue and groundless. It was too late, though. By the time the rumors were debunked, the stock price had already soared and plummeted. “The existing innocent investors got ripped off, and the company’s image was damaged,” Lim said.

In another case in April, a Kosdaq-listed firm’s price went from 7,000 won to 10,000 won in a span of one week when text messages were being sent out hyping the company’s stock. As of June 2, the price had settled back down to the 7,000 won range.

The Korea Exchange, operator of the country’s stock markets, has warned investors that such scams are on the rise. “It’s the latest form of stock price manipulation to solicit the purchase of stocks to gain profit,” said Nam Chan-woo, head of investor protection at the Korea Exchange.

Both the stock market operator and the Financial Supervisory Service, the country’s financial watchdog, issued alerts to retail investors to be wary of the messages. Despite their efforts, the number of cases has not subsided, instead increasing more than tenfold from 10 in April to 124 in the beginning of June.

Financial authorities have launched an investigation into whether major shareholders of the affected companies are involved in the pump and dump schemes. The Financial Supervisory Service said in one case, the largest shareholder of an affected company offloaded 1.6 million shares during the period when messages were being sent.

“We’ve sent alerts,” said Park Eun-seok, a director in the capital market supervisory division at the Financial Supervisory Service. “We are also carrying out an investigation of the suspicious parties in the fraudulent messages.”