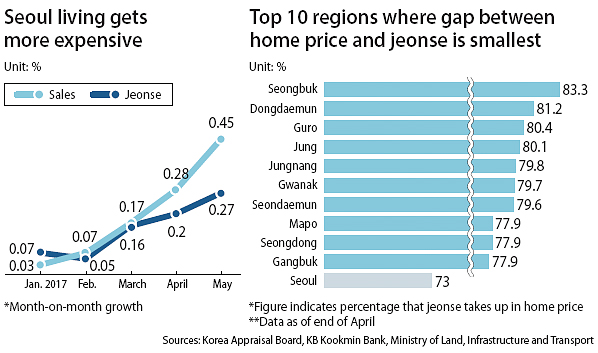 In an online community of Korean real estate investors, there are murmurs of people buying apartments at ridiculously low prices.

“It only cost me 35 million won [$31,250] to buy a small apartment in Dongdaemun District,” read one post, referring to a popular district in central Seoul.

“I managed to buy an apartment near a subway station by only paying 50 million won,” read another post. “Do you think I will be able to sell the property at least 20 million won more expensive after fixing all the problems in the unit?”

These people have been investing in real estate through an unconventional method. Normally, they would either buy a new apartment or sign a jeonse contract, a type of lease in Korea where a tenant puts down a massive deposit for two years or more and the landlord returns the deposit when the tenant moves.

Instead, these investors are buying apartments currently under jeonse contracts by directly contacting landlords and taking ownership of homes while tenants are still living in them.

This type of investment started becoming popular about two to three years ago when the housing market was hot. Profiting from this scheme requires housing prices to go up continuously. Since home prices have begun improving this year, more people are interested in buying apartments through gap investment.

Gap investment is more easily found in neighborhoods where demand for jeonse is high. Investors tend to look for apartments where the gap between the jeonse deposit and actual home price is small.

“Gap investor demand is focused on small apartment units near subway or bus stations,” said a real estate agent in Guro District. “It appears that they believe housing prices in Seoul will never go down.”

The pricey region south of the river, including the districts of Seocho, Songpa and Gangnam, don’t see as many gap investors because jeonse prices are about 60 percent of the sale price.

Gap investors come from all over the country. There are many people from the surrounding areas of Gyeonggi and Incheon buying apartment units in Seoul. According to the Ministry of Land, Infrastructure and Transport, non-Seoul residents buying apartments in the capital accounted for 19.5 percent of all transactions made in the first four months of the year.

As gap investment soars, some neighborhoods have noticed the cost of jeonse contracts going up. Mr. Lee, 45, who lives in Bundang, Gyeonggi, purchased a 59-square-meter (635-square-foot) apartment in Seongbuk District, northern Seoul for 440 million won and set the jeonse at 390 to 400 million won. He said he found a renter very quickly.

Some point out that home prices could rise faster if jeonse costs go up. “When gap investors believe they will be able to make enough profit from selling back their units, they tend to sell it to someone who actually wants to live there,” said Seo Jae-phil, a realtor in Nowon District. “Gap investors are like wholesale dealers or middlemen in the real estate market.”

Gap investors don’t make a profit all the time. If home and jeonse prices don’t go up, they might even lose their principal. There are various uncertainties in the housing market as there is high possibility that President Moon Jae-in might strengthen regulations on the market. Changes in the interest rate might take a toll as well.

“Landlords might not even able to pay back the jeonse deposits if housing prices don’t rise anymore,” said Park Won-gap, a researcher at KB Kookmin Bank. “Renters should try to avoid apartments where the gap between jeonse and home prices is small.”