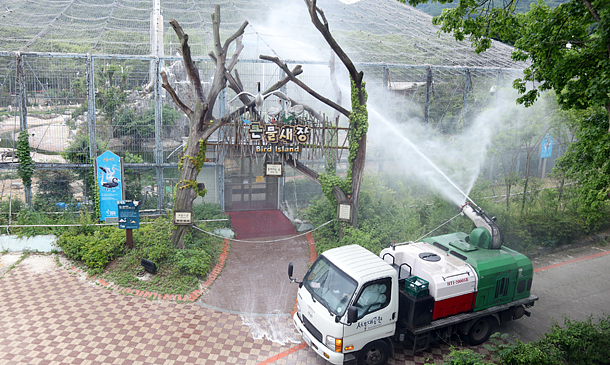 Quarantine officials spray disinfectant at an aviary in the zoo of the Seoul Grand Park in Gwacheon, Gyeonggi, on Tuesday as the park authority shut down aviaries after avian influenza broke out in Gunsan, North Jeolla, and Jeju. [YONHAP]

The first case of bird flu in Paju, Gyeonggi, in six years has been confirmed, as the virus continues to spread throughout the country.

Authorities confirmed Tuesday that the H5N8 strain found in Paju, Gyeonggi, and Gunsan, North Jeolla, are highly pathogenic, as it was found to be in Jeju, which reported a suspicious case of avian influenza infection on Friday, the first report in the recent outbreak.

On Tuesday, Gyeonggi provincial authorities banned the movement of 182,000 birds on 119 farms within a 10 kilometer (6.2 mile) area in Paju. They are also to inspect any signs of infection in all of Paju’s 166 poultry farms. Violation of the administrative order can result in up to 10 million won ($8,961) in fines or up to one year in prison.

The ministry raised the bird flu warning to the highest level in its four-tier system Tuesday, after the H5N8 strain found in Jeju was confirmed to be highly pathogenic. The alert bans any movement of poultry throughout the country today and commences emergency operations at disease control and prevention posts throughout the country.

But the damages could be harder to fix, as possibly sick birds were shipped throughout the country for more than a month by a farm in Gunsan to Jeju, Paju and other regions.

The farm shipped 3,600 birds throughout the country from April 27 to May 29, including 1,000 to Jeju. Some 2,640 birds have died in this period at the farm. The Agriculture Ministry said the farmer did not report the deaths to authorities until it investigated the farm after epidemiological tests from the Jeju farm, which was the first to report the suspicious deaths.

Meanwhile, avian influenza was also found in a preliminary test at a farm in Iksan, next to Gunsan, on Tuesday. All birds at the farm were buried alive, as is the customary culling method.

The farm in Paju may have also shipped possibly infected birds to other areas in the country. The farm bought 500 birds from the Gunsan farm on May 23. After suspicious deaths by some birds on Saturday, health authorities confirmed avian influenza infection and buried some 1,600 birds at the farm.

The farm had, however, already sold 650 of its birds to traditional markets in Gyeonggi’s Namyangju and Pocheon. Health authorities say it may be difficult to track them down because the birds were then sold to individuals at the markets.

“We ask for immediate reports by farmers if some of their birds appear sick or start dying,” said Kim Sung-sik, head of the animal health division of the Gyeonggi provincial government. “The H5N8 strain has so far led to no human infection, but we will be clamping down on bird trades and movements to prevent further spread of the disease.”

The infected Gunsan farm had also shipped birds to South Gyeongsang’s Jinju, South Chungcheong’s Seocheon and North Jeolla’s Jeonju, though any signs of infections have not been detected these areas as of Tuesday.

Some 160 birds from the problematic farm in Gunsan have not been tracked down by health authorities yet.

“The government treats these possibly infected regions, but what’s needed now is a systemic prevention system whereby poultry is checked regularly and farmers are incentivized to make immediate reports in the case of suspicious deaths,” said Lee Jung-hyun, director of the North Jeolla branch office of the Korea Federation for Environmental Movements.

The Agriculture Ministry said 31,913 birds have been buried at 18 farms in Jeju, Gunsan, Paju, Yangsan and Busan as of Monday morning.

The most recent avian influenza outbreak in the past was last winter, when more than 36 million birds were buried by March.

“It’s likely that the virus spread among chickens in the farm in Gunsan were the remnants from the outbreak last winter,” said the ministry’s official Min Yeon-tae.