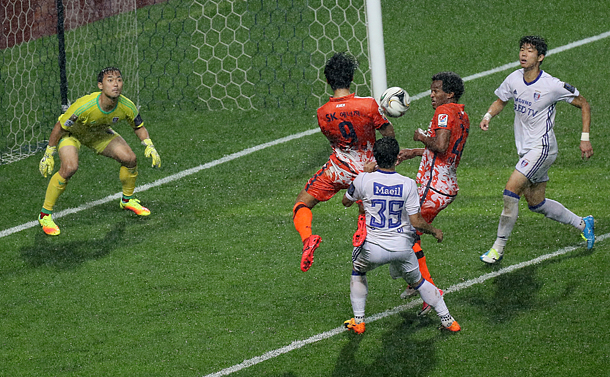 Jeju United, in orange, during the KEB Hana Bank FA Cup round of 16 match against Suwon Samsung Bluewings on Tuesday at Jeju World Cup Stadium in Seogwipo. [YONHAP]

Despite the success Jeju United achieved in the beginning of the season, they are now starting to fail.

Up until eight days ago, they were the only K-League teams to have a shot at winning all three titles - K-League Classic regular season, AFC Champions League and the Korean FA Cup - this season but now, their only hope in winning a title is in the K-League Classic.

It all started with injuries. Jeju has lost most of their starting players such as Oh Ban-seok, captain, Park Jin-po, one of Jeju’s veteran players, and Kweon Han-jin. Due to injuries to Jeju’s three starting offensive players, they weren’t able to make big changes in strategies while playing in three different league matches. Prior to the season, the team had a double squad, where the two teams within Jeju are similar in skill level, but it didn’t help them much when it came to replacing the injured players.

Although they are only halfway through the season, the players are pretty worn-out, as they’ve already played in a total of 22 matches so far in the season, which is eight more games than Jeonbuk Hyundai Motors, who is ranked first in the K-League Classic. From their intense schedule of having to play in three different leagues, in their recent games, they’ve been allowing a lot more goals than they did in the beginning of the season. Of a total of 11 goals Jeju allowed this season, eight were just from five of its most recent matches.

Adding to the injuries, lack of experience may be another reason behind the fall of Jeju. Not only the players, but the team is also young, with 2016-17 their fifth season. It is a great achievement for the team to get to the champions league only within five years since it was first created, but they are still considered young.

Since Kim Won-il and Park Jin-po are the only veteran players on the team who have experience in Asian league, after their loss, it seems it will take longer for them to get back on track.

In addition to injured players and inexperience, Jeju was missing Hwang Il-su and Lee Chang-min in its FA Cup match as they are with the Korean national football team for its upcoming match against Qatar on June 14.

Now, with a ten-day break, Jeju will have to figure out how to keep themselves in the competition. The team will have to recover from their loss and will have to rearrange some of the players to replace injured and missing players to get back on top of the K-League.