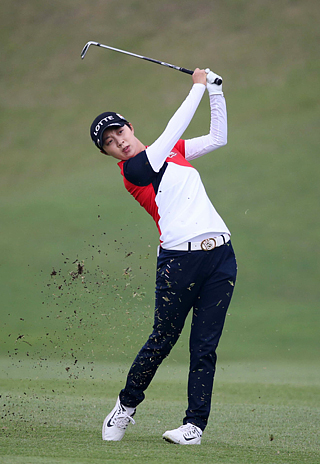 After six weeks of being a student teacher, Kim Hyo-joo finally returns to the LPGA tour as a professional golfer and will be playing at the Manulife LPGA Classic this weekend in Cambridge, Canada.

Kim, who is a senior at Korea University studying physical education, had to skip five LPGA tour tournaments to fulfill her academic duty. Although she was absent from the LPGA tour, Kim continued to stay in season by playing at 2017 NH Investment & Securities Ladies Championship in May, finishing 31st, and most recently, she competed at a JLPGA tour event last weekend, finishing 14th.

During Kim’s six week break, she focused on physical training. Kim worked out after teaching practice on weekdays and on weekends; she went to a nearby driving range in Seongnam, Gyeonggi, to work on her shots. Kim thus became stronger, and her shots gained about 10 yards in distance.

Kim also played well at the Whistle Bear Golf Club, finishing in the top 10 in two previous years. In 2015, when she played the course for the first time, she finished eighth, and last year, she was ninth. She has never carded an over-par round and her scoring average at the Manulife LPGA Classic is 68.75. 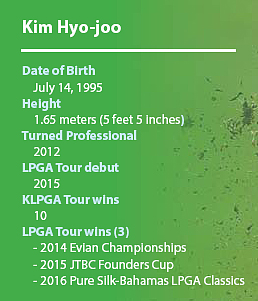 Before Kim made her LPGA tour debut, she was already well-known on the tour, winning the 2014 Evian Championship, a major tournament on the LPGA tour, in her first major appearance. Kim was therefore given an LPGA tour card without having to go through qualifying school.

Then in her rookie season in 2015, Kim became the Rolex first-time winner by winning the JTBC Founders Cup in March and in her second year on the tour, in 2016, she started her season with a victory at the Pure Silk-Bahamas LPGA Classic. But since her victory in 2016, Kim has not yet won a tournament in the 2017 season.

That said, it’s about time for Kim to rebound in the world ranking as the LPGA tour heads into its midseason. So far in the 2017 season, Kim recorded only one top-ten finish in seven tournaments, finishing ninth at the season opener, the Pure Silk-Bahamas LPGA Classic.

Since then, Kim hasn’t been able to finish among the top, but she didn’t miss any cuts, either, and her worst finish was 40th. The rest of the season will be a big factor in how well Kim adjusts to the new course setting in the United States, as she is coming from playing on the KLPGA and JLPGA tour events.

Aside from Kim, Korean players had strong showings at the Manulife LPGA Classic, where Park Hee-young won with a new tournament record at 26 under-par in 2013 and Park In-bee won the following year. Last year, Lee Mi-hyang finished runner-up.

This weekend, Kim In-kyung, Yang Hee-young, Chun In-gee, Hur Mi-jung, Chella Choi and many other Korean golfers will be competing for the trophy whereas Park In-bee, Ryu So-yeon and Park Sung-hyun will be taking a break. For Kim In-kyung and Yang, they’ll be playing for their chance to become the first multi-winner of the season.

The JTBC Golf channel will air the Manulife LPGA Classic starting at 2:30 a.m. on Friday.