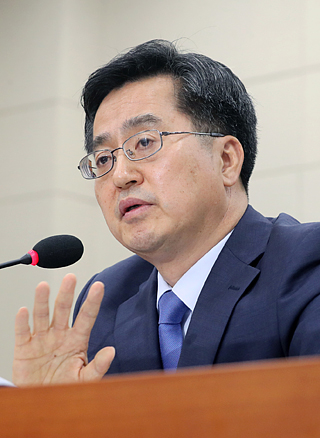 Kim Dong-yeon, a nominee for deputy prime minister for the economy doubling as finance minister, said he will thoroughly consider whether to ease regulations on qualifications on mortgages - particularly loan-to-value (LTV) and debt-to-income (DTV) ratios.

At his nomination hearing at the National Assembly on Wednesday, Kim said government branches will conduct inspections to deal with the heating real estate market.

LTV and DTV ratios are set once a year and current regulations end next month. The LTV ratio stands at 70 percent and the DTV ratio is 60 percent. The ratios were about 50 percent before regulations were eased in 2014. The ruling Democratic Party said that easing regulations has raised household debt and housing prices significantly. When toughening the regulations, the amount of money that can be borrowed for homes will be reduced.

“I will decide whether to toughen [qualifications on mortgages] after thoroughly reviewing the issue with related government branches,” said Kim. “But the government is very determined about not allowing speculations in the real estate market.”

Among the Moon Jae-in administration’s many policy goals, the biggest focus is boosting the sluggish labor market, including raising the minimum wage. Kim on Wednesday said he will be careful on this issue.

In order to have the minimum wage rise to 10,000 won ($8.90) by 2020, “wages should rise 15.7 percent year-on-year on average and I think we need to consider various factors, such as conflicts rising from small and mid-size firms and the self-employed,” Kim said.

In fact, the opposition parties have continued to attack President Moon’s policies regarding the labor market arguing they are less realistic. The People’s Party’s Lee Un-joo said in a release on Wednesday that Moon’s goal to raise the minimum wage from the current 6,470 won to 10,000 won in 2020 is like making a fool of people.

Kim also remained cautious about raising corporate taxes, saying that it’s time for the government to consider other factors such as tax exemptions and cuts, instead of making changes to corporate ones.

Meanwhile, Kim said he will prioritize three policies, which include investing in people, fair markets and innovative growth.

“I am working on having the economy sustainably grow from now on with having people take key roles in the system,” Kim said. “In order to do so, I believe improving our potential to grow further is essential through increasing number of available jobs and easing polarization in the job market.”

He added that Korea’s gross national income per capita surpassed $20,000 in 2006 but remained below $30,000 since, and that the next five years will be crucial for the country.

Meanwhile, the National Assembly’s state affairs committee on Wednesday postponed adopting the confirmation report of Kim Sang-jo, a nominee to head the Fair Trade Commission, due to scandals surrounding him. The four ruling and opposition parties decided to discuss the issue again.

Under current law, the confirmation hearing process should be finished 20 days after the nomination and Thursday marks the deadline. If the lawmakers fail to agree by Thursday, the Blue House can ask the National Assembly to review it for another 10 days.