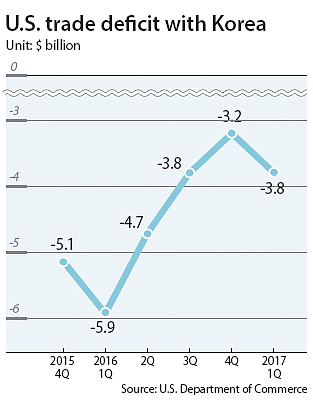 Korea reduced its goods trade surplus with the United States by 31 percent year-on-year between January and April. This pushed Korea’s rank down among the top 10 surplus countries in goods trade with the U.S. from last year’s fifth to ninth this year.

According to the U.S. Commerce Department’s April report on international trade, Korea’s combined trade surplus in goods in the first four months was $7.9 billion, a 30.9 percent decline compared to the same period last year. This was the largest fall among the top 10 nations that raised a surplus in U.S. goods trade.

In detail, imports from the U.S. rose 23.7 percent year-on-year to $15.7 billion while exports fell 2.1 percent to $23.6 billion. April’s imports alone were $4.4 billion, which the U.S. Commerce Department said was the “highest ever on record.”

The figures may be a relief to Korea’s trade officials and exporting companies since the surplus was an impetus for U.S. President Trump expressing his intentions to revise the free trade deal between the two countries. Since his inauguration, Trump has strongly pushed his protectionist agenda and the trade imbalance with multiple countries served as a strong basis for his drive.

Other countries that reduced the volume of goods trade surplus were Japan, Germany and India. China remained the top gainer with a $106.5 billion surplus, and Mexico was a distant second, with $23 billion. Its trade surplus was 4 percent higher than last year.

U.S.’s total deficit for goods trade between January and April increased 8.4 percent to $239.7 billion this year. Exports rose 6.7 percent to 496.6 billion, but imports outnumbered the hike at a slightly higher rate by 7.2 percent to $736.3 billion.

“While the overall trade deficit continues to grow, it is too soon for the numbers to reflect the recent deal with China and other actions of this Administration is taking to level the balance of trade,” U.S. Commerce Secretary Wilbur Ross said in a press release last week. The statement mentioned Korea as an example of “improvement” in reducing trade gaps.

The April report also included quarterly figures of the U.S trade deficit and surplus, which includes goods and services. Korea’s trade surplus for this year’s first quarter was $3.8 billion, placing it seventh. This is a 36 percent decline compared to last year’s first quarter of $5.9 billion.