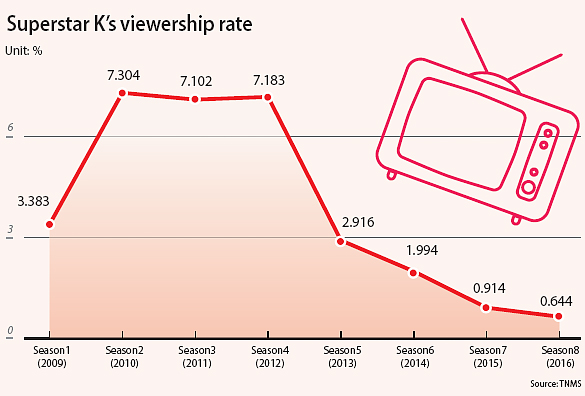 After years of success, audition programs, which once provided the opportunity for pop star wannabes to become stars, are now at risk of collapsing.

The future of Mnet’s legendary “Superstar K,” which has generated popular singers like Seo In-guk, Busker Busker and Roy Kim, is unknown after functioning as one of Korea’s top music audition programs. Though Mnet has not yet confirmed the program’s cancellation, the TV network currently has no plan on airing the show next season.

“‘Superstar K’ is not included in our lineup this year. Though we can’t say that the show has been cancelled, we’re currently having internal discussions [on whether to continue the program],” said a source from Mnet about the program that has aired a new season each of the last eight years.

Aspiring singers showing off their hidden talents and their heart-touching background tales kept viewers glued to their televisions, fervently supporting their favorite contestants to make sure they make it through the next level.

Seeing the process of a nobody becoming a nationwide star gave a thrill to audiences. Singers such as Huh Gak, who used to be a ventilator repairman, rose to super stardom after appearing on the show. Also, the fact that the audience could cast votes to support their favorite contestants and that anyone regardless of their age could audition made viewers feel involved and attached to the show.

Though the program’s popularity multiplied after each season produced new stars and discovered truly talented singers, it failed to create much buzz after its fifth season in 2013. To regain its popularity, the show made a number of alterations like adopting a new evaluation method. But response was not explosive, as seen by the 0.64 viewership rate last season recorded. According to market research firm TNMS, the fourth season marked the highest viewership rate out of the entire franchise, with 7.18 percent.

Though the show performed fairly well over the past six years, it could not avoid becoming redundant. Instead of continuing to repeat what they had done, the show decided to wrap after its most recent season.

“When it (Kpop Star) first kicked off, its novelty of featuring the heads of entertainment behemoths (SM, YG, JYP) to personally cast talented participants to their agencies, which was never tried on any other audition program in the world, was highly lauded,” said the program’s producer Park Seong-hun. “But as new seasons unfolded, we started feeling concerned over whether we were repeating what we had done previously.”

Regarding the reason for the program’s cancellation, Park further explained that the network had hoped for participants to become more desperate on stage instead of thinking of the show as an opportunity that comes annually.

Audition programs swept the world throughout the 2000s with shows like “American Idol,” “Britain’s Got Talent” and China’s “Girls Fighting.” Aspiring amateurs striving towards their dreams touched the hearts of the public, and the winner’s twist of fate functioned as an effective heartwarming drama.

Though the aforementioned “Superstar K” and “Kpop Star” were two of the most popular audition programs, other similar audition shows with slightly different formats like MBC’s “Star Audition: The Great Birth” and Mnet’s “The Voice of Korea” took over TV.

After years of success, however, the popularity of these programs featuring ordinary people has died down. Instead, audition programs that star trainees from entertainment agencies or less renowned singers have begun to seize audiences’ attention, partially attributed to the viewers’ increased expectations from contestants.

Amid the fading popularity of audition programs like “Superstar K,” left, which gave amateur singers a chance to shine, shows that feature less renowned performers or trainees like “Produce 101,” right, are gaining popularity. [MNET]

Mnet’s “Produce 101” (2016), which featured 101 female trainees and created the temporary girl group I.O.I, was well-received enough that the network ordered a second season, which is currently airing.

MBC’s “King of Masked Singer” (2015-present), which is currently one of the most popular singing programs with a nearly 10 percent viewership rate, functions as a stage for almost forgotten singers or celebrities to get back into the limelight.

“Featuring amateurs carries lots of risks because their skills are not guaranteed, so it seems that audition programs have begun shedding light on rookie singers or singers with talents that have not yet been seen by the public,” said cultural critic Lee Dong-yeon.

Turning cameras on to existing singers also highlights the commercialization of audition programs, according to Lee. “The common interest between audition shows and entertainment agencies is another reason for featuring lesser known singers, as audition programs have become one of the most effective means to expose oneself to the general public.”

Discovering talented people - whether amateur or pre-professional - and giving them exposure to a wider audience is a good thing for both singers and music lovers. At the same time, there are concerns over pop music’s increasing reliance on entertainment shows, as it means contestants are evaluated not only based on their musical talents but also based on how much they can get viewers to like them.

“The winners of [audition] variety programs are not people who necessarily sing well, but are people with interesting and heart-touching back stories that are attractive enough to garner viewer attention,” said cultural critic Lee Taek-gwang, a professor of American Studies at Kyung-hee University.

When asked how long these types of audition shows may last, Lee said, “Due to their influence, the shows are not likely to disappear for a while.”