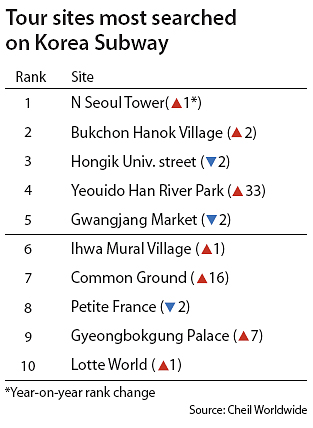 Chinese tourists have shifted their travel interests, from shopping to enjoying the city landscape, according to research by Samsung Group’s advertising unit Cheil Worldwide and its digital marketing subsidiary PengTai.

The results were based on PengTai’s analysis of words searched on the Korea Subway application - a mobile service that provides subway maps and information on popular tourist sites in Korea.

The most searched location in Korea in May was the N Seoul Tower in central Seoul. It ranked second last year after the neighborhood of Hongik University, called Hongdae for short. Bukchon Hanok Village, famous for its Korean traditional homes, placed second this year, climbing two ranks from last May.

A popular neighborhood of trendy restaurants, bars and shops, Hongdae lost its No.1 crown this year and fell to third place. Myeongdong, favored by Chinese shoppers, fell in popularity. Ranked fifth last year, it dropped to 15 this year, falling out of the top 10 for the first time.

“In general, ranks of places like Myeongdong and several huge restaurants fell this year,” said the report. “The main reason seems to be the halt of group tours which was banned after the Korean government’s deploy of Thaad.”

Attractions whose ranks rose the most year-on-year in May were associated with outdoor activities. The Hangang Park in Yeouido jumped 33 spots to No. 4 this year, and Seoul Grand Park soared 53 places to 11th.

Samcheong-dong, with its traditional Korean houses, galleries and shops, moved up 24 places to 17th, after being featured on the hit TV series, “Guardian.”

The report explained that while Chinese tourists previously tended to focus on shopping and visiting well-known eateries, the trend was to enjoy the city as locals do daily.

PengTai’s analysis also hinted at an influx of tourists from Hong Kong and Taiwan.

“In short, the recent tourism trend in Korea can be reduced to two points: first, Chinese tourists are increasingly trying to experience the local life; second, non-Chinese tourists are coming in so we have to prepare for them,” said Nam Yong-sik, chief executive officer of PengTai.