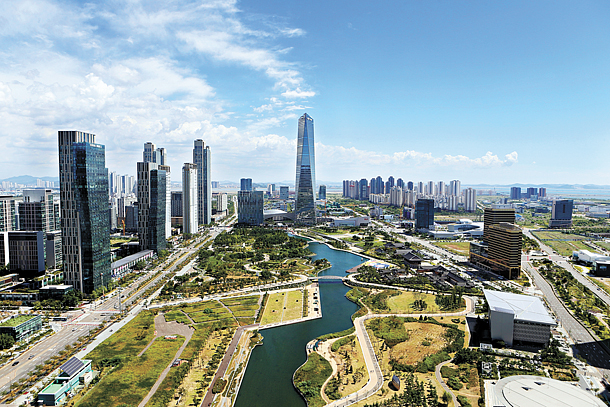 The New Cities Summit, now in its sixth year, begins today in the planned city of Songdo, Incheon, and will engage city planning experts and policy makers on the topic of “Thriving Cities: The Building Blocks of Urban Wellbeing.”

Hosting the summit in Songdo is somewhat fitting because the city was built from scratch with consideration for environmentally-friendly technology and networked infrastructure. The city has a pneumatic waste disposal system, water recycling system, accessible public transit system and sensors installed in all corners of the city to make urban living more convenient and safe.

“As hundreds of global urban leaders gather for the summit, we hope Songdo will inspire new ways of thinking about building cities with sustainability and wellbeing at their core.”

Songdo has a small carbon footprint, the foundation said, and its residents use 40 percent less energy than those living in cities of a similar size. Summit delegates were introduced to the city’s waterways, shipping infrastructure and sustainable buildings during site visits Wednesday. Starting today, they will meet to discuss the concept of “urban wellbeing” and standards for creating greener, smarter cities.

A plenary session titled “Understanding Urban Wellbeing” will discuss cities’ relentless drive toward modernization and what it means in the process to create a truly “healthy” city. As rapid urbanization also brings consequences like higher traffic congestion, pollution and crime, mayors and city planners discuss how they are tackling the challenges with limited government budgets.

Panelists include Vera Baboun, who was elected in October 2012 as the first female mayor of Bethlehem and has a research background in gender equality; Ede Ijjasz-Vasquez, senior director of the World Bank’s social, urban, rural and resilience global practice; Michel Mossessian, founder of Mossessian Architecture; and Paul Scialla, founder of the International WELL Building Institute, which has developed a system for evaluating how certain features of buildings and communities impact the health and wellbeing of their denizens.

An afternoon session today titled “Greenfield Cities: Building Digitally Native Cities” will discuss how to build cities from scratch - and maintain the technology after they are complete. In many greenfield projects, builders have the opportunity to incorporate the latest technology, but after construction is done, the applied technology sometimes has already become obsolete. The session will address how planned cities can stay ahead of the curve.

The session will be moderated by Caspar Herzberg, president of Schneider Electric’s Middle East and Africa business, who was instrumental in smart city planning for Songdo. Panelists include government officials from different cities and heads of construction companies.

On the sidelines, the African Union Economic, Social and Cultural Council will host a talk on affordable housing and clean water.

Throughout the day, there will be presentations from this year’s “Global Urban Innovators.” Every year, the forum selects a handful of start-ups that are using technology to tackle urban challenges and invites them to present on their work.

Among them is Korean start-up Alt-A, which is applying wireless sensors and 3-D mapping to CCTVs to make roads safer. The two-year-old start-up produces beacon-based traffic lights that alert drivers of pedestrians and cyclists coming in from blind spots like right-turn corners.

“Even though there are so many CCTVs installed around Seoul, the videos aren’t utilized as much unless something happens,” said Lee Tae-woo, CEO of the start-up. “So we developed software that can distinguish pedestrians, pets and other objects in blind spots for CCTVs to make what we call a smart traffic beacon.”

The start-up is currently in discussions with the district offices of Eunpyeong and Seodaemun in Seoul about installing its traffic lights in the area. In October, Alt-A will also export its system to the Kingston neighborhood of London, where many cyclists and pedestrians are hit by cars turning at blind spots.

Other presenters include WhereIsMyTransport, a U.K.-based start-up that developed a platform which integrates transport data in several African cities where 80 percent of public transport runs without a set schedule; and ZenCity, which created an artificial intelligence-based analytics dashboard that can aggregate real-time data for city governments by tracking social media networks, municipal platforms and information hotlines. 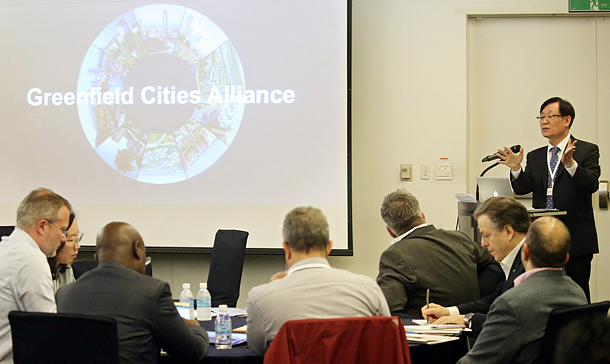 Lee Young-geun, right, commissioner of the Incheon Free Economic Zone Authority, greets guests during a launch meeting of the New Cities Summit on Wednesday in Songdo, Incheon, where the summit will be held until Friday. [INCHEON FREE ECONOMIC ZONE]

The summit has received support from the Incheon Metropolitan City Government and Incheon Free Economic Zone, which is co-hosting the forum and under which Songdo is included.