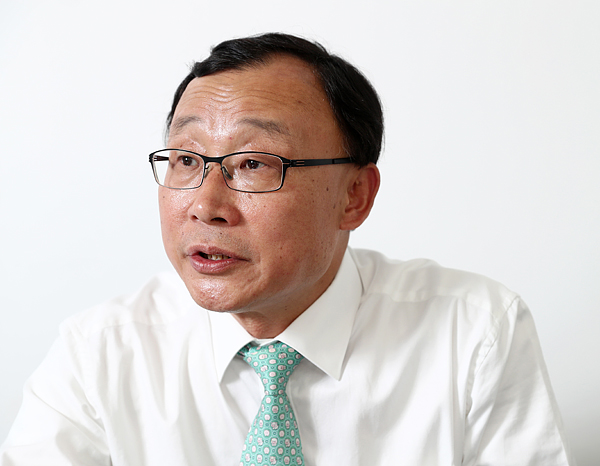 Chae Dong-wook, former prosecutor general under the previous Park Geun-hye administration, resigned in 2013 after reports came out that he fathered a son out of wedlock.

Still, many suspected the presidential office intended to replace him because of his handling of the investigation into allegations that the National Intelligence Service (NIS) meddled in the 2012 presidential election.

As the JoongAng Sunday sat down with Chae, he looked calm after the highly-publicized scandal. On the wall in his office were paintings he drew under the pseudonym “Dustin Chae.”

Q. You are working as a lawyer after three years of resignation. How do you feel?

A. It was September 2013 when a report about my illegitimate child first emerged. A week after, then Justice Minister Hwang Kyo-ahn ordered an inspection on the matter and I resigned. Then I left the prosecution at the end of the month. But what makes me feel really distressed is to see the prosecution affected by power struggles and external forces after I quit over my private issue. I feel sorry to junior prosecutors and the public. I wonder if it was the best way [for the Blue House] to handle my private issue rather aggressively, even if I fell out of favor with a powerful person.

Do you think that the investigation into the National Intelligence Service led to the resignation?

The biggest issue of the case was whether the prosecution would hold Won Sei-hoon, a former NIS chief, and Seoul police chief Kim Yong-pan for violating the public official election act. But the Blue House and the Justice Minister appeared very cautious, and there were tensions behind the curtains over the issue of detaining the two chiefs. Still, it would not be appropriate if I go deeper into the details.

The prosecution, anyway, concluded that the two people should be held responsible for meddling in an election since the NIS’s involvement in elections is a serious issue that jeopardizes the order of a nation. But we faced challenges from the powerful circle. A prosecutor tried to quit the job because of the struggle, so I had to persuade him to remain.

What is the lesson of the NIS scandal?

My principle is to say that black is black and white is white, which means that job will be done by the rules. I thought that even if the NIS is convicted of meddling in the election, it would not necessarily make the win of a president [Park Geun-hye] illegitimate. The right scenario was that as a prosecutor general, I could make it clear that the president has nothing to do with the smear campaign, vow to prevent the recurrence of such a scandal and reform the intelligence body and police.

But the Blue House went the other way around. It fired me and Yoon Seok-youl, then head of the NIS probe team. If the former president and aides chose the right way, national order could be kept. The reform could keep any potential corruption in check and the police and the NIS could play their proper roles. In that way, the influence-peddling scandal that claimed the former president Park could have been prevented.

Do you have personal ties with the former president?

I haven’t met her in private settings and have had no personal phone calls with her. The only time was when I went to the Blue House to receive the letter appointment with my wife. I spent 50 minutes there sipping tea and having conversation. I felt sad to see the impeachment.

What do you make of the discussion to reform the prosecution?

Broadly, it can be divided into two segments; reform of the personnel system and the investigative system. There should be specific, agreeable standards to appoint leaders. It is destined to fail if cronyism is prevalent.

As for the investigative system, President Moon Jae-in pushes for the distribution of investigation authority to the police and the establishment of an investigation team that exclusively handles the corruption of high-ranking officials.

This would overturn the 70 year-old history of the investigative history. The radical change would do more harm than good. I doubt if the problems will be solved if the power is simply redistributed to the police. The change would merely rearrange the investigative authority. The key should be making the prosecution work for the people.

Is there any alternative way to reform the powerful investigation authorities?

One way is to overhaul the nation’s criminal justice and surveillance system. We could embrace the U.S. system, in which an umbrella bureau like FBI is at the top of specific investigations teams that encompass security and financial crimes.

The new system will allow the country to centralize personnel and financial resources for specialized probes, and there will be less power struggling. In order to prevent the body from being too big, we can have a committee to strike the balance of power.

How should we define the roles of the police and prosecutors?

The prosecution should take on the roles that it was originally entitled. Instead of carrying out investigations, prosecutors should direct them and have the right to seek warrants.

It should be reborn as a body that ensures human rights and criminal justice. The core role of the police is policing and maintaining security. So they should be in charge of security-related crimes.

How have you been after resignation?

After leaving the prosecutors’ office, I had nowhere to go. I retreated to the mountains in a far-flung area because I was worried my existence would cause trouble to friends and acquaintances. I kept a distance from worldly affairs and didn’t read newspapers. I heard the news of prosecutor Yoon being demoted days later.

I moved into a one-room house in Jeonju, North Jeolla, in June 2014. There, I met artist Yoo Hyu-yeol and told him I wanted to draw pictures. He said okay. There were two things that helped me go on with my life: temple life and drawing. I stayed at a temple in Gimje, North Jeolla. I did 108 prostrations on a daily basis and spent the rest of the time painting. I felt deep happiness when I drew pictures. I spent some 17 hours a day drawing and completed 80 printings in a year.

How will you run your law firm Seopyeong?

I founded the firm with my lawyer friend Lee Jae-soon, and another five to six lawyers will soon join. I plan to hire talented legal experts and will also do pro bono work in the public interest. I am paying attention to those who get discriminated or receive unfair treatment in small and midsize companies.