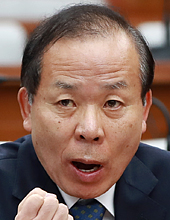 Kim Yi-su, President Moon Jae-in’s nominee for chief justice of the Constitutional Court, apologized Wednesday for handing down rulings that found several anti-government protesters in the 1980 Gwangju Democratization Movement guilty, saying the “pain” he subsequently felt was as if he had made false accusations.

The 64-year-old, who at the time was a military judge, said during his confirmation hearing that it was “awfully difficult” for a novice like him to defy the law enacted by the authorative government. “I sincerely apologize to everyone who is living in pain today because of my rulings,” he said.

“As a Gwangju citizen, it’s hard for me - even to this day - to forget the shock, depression and anger that I went through at that time,” said Kim. “I tried very hard to teach other military judges about Gwangju’s reality, the side that I personally witnessed.”

The May 18 Gwangju Democratization Movement refers to the 10-day civil uprising against the military dictatorship of the Chun Doo Hwan government from May 18, 1980, when students from Chonnam National University staged a protest in Gwangju calling for democracy.

The following day, the Chun leadership dispatched Special Forces soldiers to Gwangju, who opened fire on protesters to crush the demonstration. The protesters responded by looting local police stations to obtain their own weapons. Statistics from the May 18 Memorial Foundation indicates nearly 154 were killed during the uprising or after due to injuries, and 70 others went missing.

In one case Kim was assigned to at that time, a man was accused of spreading false rumors that soldiers were stabbing college students in Gwangju with swords. He was eventually convicted, but what caught the attention of local lawmakers today in the confirmation hearing was the verdict Kim drafted. The nominee apparently tried to underrate the uprising, saying a “bit” of bloodshed had occurred when the army tried to suppress Chonnam National University students’ protest, adding that any false rumors would add fuel to the fire.

A coalition of civil groups honoring the lost lives in the uprising said in a statement Tuesday they wouldn’t blame Kim for his past rulings, adding that his social rank was not high enough to have been in the forefront of the government’s crackdown on protesters.

Seven cases related to the democratization movement in which Kim found the defendant guilty were upended many years later in a retrial, ruling the convicted innocent.

Regarding his minority opinion in a 2014 Constitutional Court case that disbanded the far-left Unified Progressive Party, which was accused of conducting pro-North Korean activities, Kim showed no regret. The nominee, who since 2012 has been serving as one among nine justices at the court, vowed to bring social harmony in Korea by solving ideological conflicts.