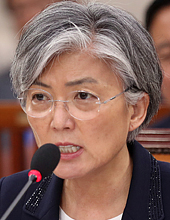 Foreign affairs minister nominee Kang Kyung-wha said Wednesday in a confirmation hearing that the South Korean government needs to show more leadership in the international community on the issue of North Korean denuclearization, calling it the most urgent obstacle to peace on the peninsula.

If she becomes minister, Kang, 62, said she would act “firmly” against any provocation from the regime and play a “proactive” role in ending North Korea’s nuclear weapons and missile development program.

Inter-Korean dialogue will “run parallel” to this, she said.

On resuming the Kaesong Industrial Complex and tour packages to Mount Kumgang, Kang said in a written statement she would “cautiously” look into the matter with a “balanced perspective,” making sure any steps don’t counteract the rest of the world’s stance on North Korea.

If there is ever serious talk about restarting the Kaesong complex, Kang said she would discuss this with the UN Security Council. The joint project between Seoul and Pyongyang has been suspended since February 2016 after the North followed up its fourth nuclear test with a long-range ballistic missile launch.

The tour program to North Korea’s Mount Kumgang has been suspended since 2010, when Seoul imposed economic sanctions to punish Pyongyang for its torpedoing of the Cheonan warship, which left 46 sailors dead.

To this day, the North denies any involvement.

Kang stressed that the suspension of all inter-Korean economic projects “resulted from North Korea’s unprecedented provocations,” adding that its torpedoing of the Cheonan warship and shelling of Yeonpyeong Island, the latter of which claimed the lives of two soldiers and two civilians, were brazen violations of basic agreements between the two countries.

Kang, who was tapped to become the first female foreign minister, questioned the “sincerity” of the 2015 comfort women agreement signed between Seoul and Tokyo when Park Geun-hye was president, saying there were “many doubts” whether the deal best served the victims’ interests and whether it left the right historic message.

The nominee said she would “work hard” to push Japan to make some kind of a sincere move that would “touch the hearts of the victims.”

“I’ll check whether [South Korea’s] Foreign Affairs Ministry botched [any steps] during negotiations [with Tokyo], and if necessary, question anyone held responsible,” she said.

With the icy relationship between Seoul and Beijing after South Korea agreed with the United States to deploy the Terminal High Altitude Area Defense (Thaad) missile shield here, Kang said she would seek “sincere communication” with China and consider sending a delegation of high-leveled officials to Beijing in order to “narrow the gap of thoughts” between the two countries.