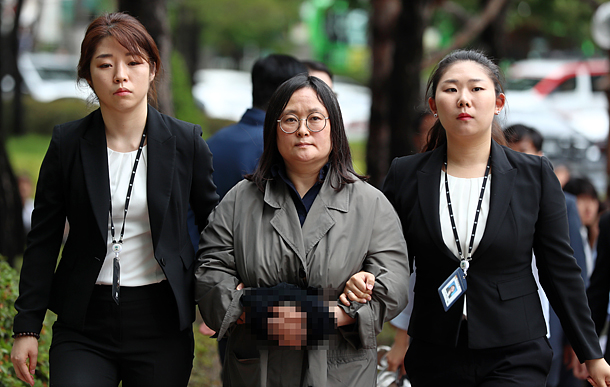 Yoo Som-na, center, eldest daughter of Yoo Byung-eun, the late patriarch of the family behind the operator of the doomed Sewol ferry, is taken into the Incheon District Prosecutors’ Office on Wednesday. Yoo was extradited three years after she fled prosecution investigations. [YONHAP]

Yoo Som-na, eldest daughter of Yoo Byung-eun, the late patriarch of the family behind the operator of the doomed Sewol ferry, who was extradited to Korea three years after she fled prosecution investigations, denied the charges against her upon arrival here Wednesday and expressed her “hopes for a fair trial.”

“I have never fled from authorities but I waited abroad to protect myself from ruthless authorities here,” she told reporters at the Incheon District Prosecutors’ Office, where she was transferred upon her arrival at the Incheon International Airport Wednesday. “I hope for a fair trial now.”

After the Sewol ferry sank on April 16, 2014, off Korea’s southwestern coast and killed 304 people, the 73-year-old patriarch of the business, Yoo Byung-eun, and his family were pinpointed as key figures behind the accident. Yoo was found dead in midst of a manhunt in June 2014, and all key relatives have been arrested and tried on charges including embezzlement except Som-na and Yoo’s second son Hyeok-gi, whose whereabouts are still unknown.

Yoo Som-na is accused of embezzling 49.2 billion won ($43.8 million) in a business involving former affiliates of her father’s company and her brother, Dae-gyun. She was sought by authorities with an arrest warrant from 2014, valid until 2028.

“I feel bad for the young lives that perished on the ferry,” Yoo said. “I know that words cannot comfort the relatives of the victims, but I have been hurting for them all this time, too.”

Yoo denied the allegation that her father and her family are key figures behind the sinking of the Sewol ferry. An initial investigation into the ferry drew suspicion over whether the ferry capsized because of gross mismanagement. Yoo Byung-eun was the de-facto owner of the operator, Cheonghaejin Marine.

The operator carried out the remodeling between October 2012 and February 2013 to increase the number of passenger cabins on the third, fourth and fifth decks. After the ferry sank, authorities said the Sewol carried 124 automobiles, 57 trucks and four kinds of heavy equipment such as excavators, adding up to 185. But the operator initially reported that the Sewol carried 180.

“I cannot believe the reports that my father was the de facto owner,” Yoo said. “As for how Cheonghaejin Marine was operated, I have no knowledge.”

She denied the charges against her.

“I have worked all my life and received due wages,” she said. “I have not embezzled any money.”

She added, “I waited all this time because I thought the people who were arrested and investigated received unfair treatment. So I waited.”

Yoo she was arrested in Paris in May 2014, and the local court ruled for her extradition in January 2015. She filed an appeal to the French Court of Cassation and another suit to the Conseil d’Etat, the highest authorities in France for civil and criminal suits and administrative litigations. All legal procedures concluded last month with the ruling for her extradition to Korea.