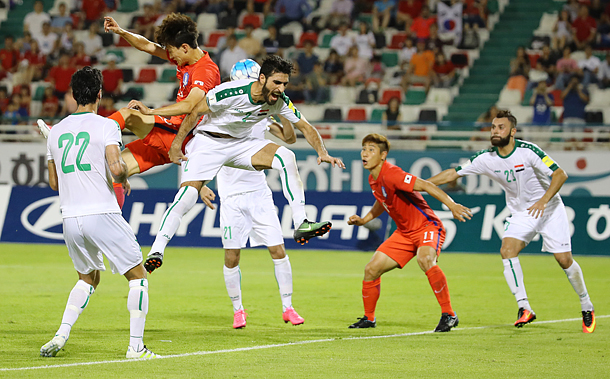 The Korean national football team, in red, during its tune-up match against Iraq, ranked 120th in the FIFA World Ranking, at Emirates Club Stadium in Ras Al Khaimah, the United Arab Emirates, on Wednesday. [YONHAP]

The Korean national football team’s tune-up match against Iraq was supposed to be a confidence booster before the actual qualification match against Qatar next week, but after a scoreless draw at Emirates Club Stadium in Ras Al Khaimah, United Arab Emirates, on Wednesday, fans have seen more problems that need to be fixed.

Uli Stielike, head coach of the Korean national football team, made two big changes for the match. During the first half, he finally changed the formation by assigning Ki Sung-yueng between Jang Hyun-soo and Hong Jeong-ho in center defense.

This was the first time Stielike brought up the three-back card since he first got appointed as the head coach in October 2015.

“Since Iraq came up as a one top, we should’ve changed our 3-4-3 formation to four back,” Stielike said. “However, we didn’t do that because I considered the tune-up match as an opportunity to experiment.”

In the second half, he made aggressive changes in players to check on the skill level of offensive players. He called up Lee Chung-yong, Son Heung-min and Nam Tae-hee during half time to substitute them with Hwang Hee-chan, Lee Keun-ho and Lee Myung-joo. In the 64th minute, Ji Dong-won was substituted for Lee Jae-sung and in the 76th, Hwang Il-su got substituted for Ki to strengthen the team’s offense.

Unfortunately, both the experiments led to failure. Although Korea didn’t allow any goals in the first half, the three-back formation showed weakness in the team’s offense. Since the team’s offense and defense were moving slowly, there was no time for Ki to get into offense. Korea played a slow match, having the first goal attempt in the 36th minute. Stielike ended up changing Ki as a defensive midfielder and changed the formation back to 4-1-4-1 later in the match.

But Korea’s slow play continued in the second half. From Iraq’s concentrated defense and having to play in extremely hot weather, at 35 degrees Celsius (95 Fahrenheit), the Korean national football team was slower in speed and eventually lost concentration.

Even worse, throughout the match, Son Heung-min, who joined the team after the best season of his football career, remained silent. Son played as a left winger and had a mediocre game at best. He got stuck by Iraq’s defense throughout the game and had quite a number of pass misses. The only positive was Son’s goal attempt in the 36th from Park Joo-ho’s pass. That said, it’ll be another task for Stielike to figure out how to have Son playing like he did while in the Premier League.

“Our time in the UAE helped us adjust to the new environment in the Middle East but we didn’t get the result we wanted,” Stielike said after the match. “We’ll look over our strategies and take the positives from our match against Iraq to win against Qatar. Since we’ve already lost two games, there shouldn’t be any more losses.”

Although Stielike said the game was all about experimenting for their upcoming match against Qatar, having zero shot on target throughout the 90 minutes was a big disappointment against a team ranked 120th in the FIFA World Ranking.

Earlier in the week, Korea had to make changes to their trip to Doha as the UAE joined Saudi Arabia and Bahrain, Arab nations, in cutting diplomatic ties with Qatar due to its alleged support of terrorism.

From this, all the flights arriving to and from Qatar were suspended, affecting Korea’s schedule. But Korea will still be heading to Qatar by stopping in Kuwait and will be arriving an hour and 40 minutes later than scheduled. The match will be broadcasted live on JTBC at 4 a.m., Korea time on Wednesday.