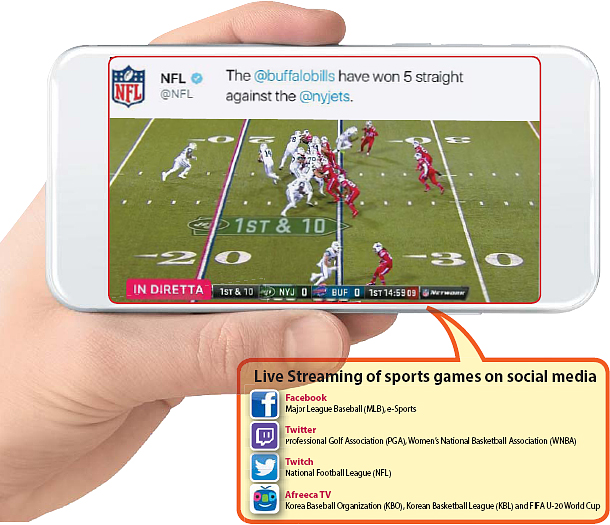 The world of sports has close ties with television, as it has long been the only means of broadcasting games. So much so that basketball changed the format of the game into quarters so television could have more time for advertisements.

But now, social media is threatening this relationship as companies have gained broadcasting rights to live stream games. Last month, Facebook signed an agreement with Major League Baseball to live stream at least 20 major league games on Fridays, which can be seen only in the United States. Prior to the agreement, Facebook had a partnership with MLB in 2011 and live streamed exhibition games. Dan Reed, Facebook’s Head of Global Sports, explained that since baseball engages community involvement, it blends well with social media.

Facebook was also granted broadcasting rights for Major League Soccer in March and with the Electronic Sports League (ESL).

This year, Amazon bought the broadcasting rights for NFL’s ten games for $50 million, five times more than Twitter paid. Amazon will live stream the games through Twitch.tv, a subsidiary of Amazon. In November 2016, Mark Zuckerberg announced his “video first strategy,” believing there is more influence, better communicability and more profitability in video content than in pictures or text.

And sports is benefitting from social media’s influence. Facebook has 1.94 billion users and 35 percent of them have liked either a sports team or an athlete on their home pages. Since the average age of people watching major league games through television is 55, live-streaming games through social media is a way to attract younger fans.

Although Korea does not actively engage in having social media live stream games, this is slowly starting to change. SBS, which had the broadcasting rights for the FIFA U-20 World Cup, resold the rights exclusively to Afreeca TV. Since the game wasn’t shown on portal sites, a lot of fans accessed Afreeca TV to watch matches. During the U-20 Korean national football team’s group match against Argentina, Afreeca TV had up to 2.5 million viewers.