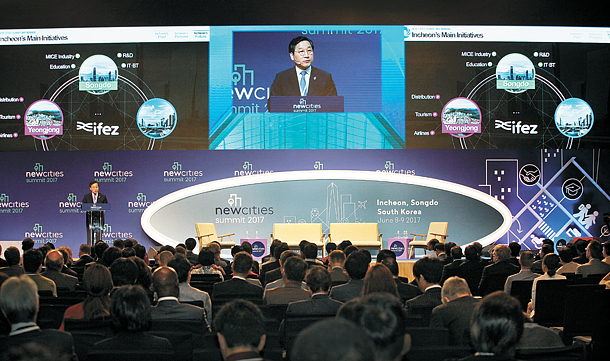 Incheon City Mayor Yoo Jeong-bok gives the keynote Thursday at the NewCities Summit 2017 at Songdo Convensia in Incheon. “A major gateway to the Korean peninsula and a center of the international flow of goods, Incheon is the optimal place for the fourth industrial revolution,” he said. [PARK SANG-MOON]

SONGDO, Incheon - Government officials, entrepreneurs and city planners from around the world gathered Thursday to discuss urban planning, not only from the perspective of technology, but also governance, architecture and city services.

The NewCities Summit 2017 took place at the Songdo Convensia. Held for the sixth time, the annual event featured panels and speakers that exchanged views under the subject, “Thriving Cities: The Building Blocks of Urban Wellbeing.”

“To thrive, our cities must become ecosystems of health and wellbeing where each part of the city works for one common goal and that is improving people’s quality of life,” said John Rossant, chairman of NewCities Foundation, organizer of the event.

In his opening speech Thursday, Rossant also added that advanced technology and efficiency are only parts of the solution to design “wellbeing,” or healthy cities. “The focus must shift to cities people want to live in - which I call the ‘wellbeing imperative,’” he said.

Incheon City Mayor Yoo Jeong-bok gave the keynote to the hundreds in attendance.

After the opening ceremony, Yoo met individually with several foreign guests, including Jonathan Ballon, Intel’s vice president for the company’s Internet of Things sector and one of Thursday’s panelists.

The two promised to seek opportunities to collaborate in advanced information technology and infrastructure, including autonomous mobility in which Yoo expressed particular interest. Intel recently acquired the autonomous vehicle technology firm Mobileye to boost its driverless car business. “We’d love to partner with you to leverage Incheon as a test-bed for new technologies,” Ballon replied.

Panel discussions on Thursday morning focused on exchanging ideas on the concept of “wellbeing,” defining a “healthy city” and whether it’s possible to establish a global standard to measure cities’ wellbeing.

“Our answer to how we should treat cities is certifying them rather than standardizing them, to approach them as they are rather them telling them to meet this line, because each city has their unique challenge and their own unique way,” said Mahesh Ramanujam, president of the U.S. Green Building Council, a nonprofit organization that promotes “green” building.

Afternoon sessions had themes on civil participation, health care, transportation, data use and cultural aspects, including urban design and the operation of public space.

In a panel titled Crowdsourced City, participants spoke about crowdfunding and participatory budgeting as a decision-making process that enhances locals’ involvement on how their neighborhood should be shaped.

“By relying almost solely on council and minister parties, we were actually blocking out the participation of the citizens and the businesses that had a lot to give and I was really intrigued by the idea that we can apply the crowdfunding model to the urban environment and use that as a springwater of creativity and innovation for people with good ideas on how to make their local places better deliver their needs,” said Chris Gourlay, founder and CEO of the U.K.-based start-up Spacehive, which provides an online crowdfunding platform for local projects.

Songdo was the first “greenfield city” to host the NewCities Summit since it launched in 2012. Greenfield cities include development projects that design and build new cities from scratch. One afternoon program, Greenfield Cities: Building Digitally Native Cities, featured cases around the world where developers had to design the city’s infrastructure and structure in advance to the ongoing digital trend so that it will not be left behind by the time the city is fully constructed.

In India, real estate developers are mandated to govern and establish infrastructure on large project sites such as Palava City until its construction is complete. “In case of Palava, it could take as much as 40 years to develop,” said Shaishav Dharia, a regional CEO of Palava City. “How I govern the city dictates how the future of the city will do and how I design the city is keeping in mind I have to run it for a very long time-and that’s where technology comes in: How do you adopt it so that it can double [the benefits] effectively but at a very effective cost?”’

In Cairo, an established city, developers are expanding and upgrading the city in a major project that will push its borders to include a new area roughly the size of Singapore. According to Ayman Ismail Soliman, chairman of Egypt New Capital which heads the project, government offices and ministries are moving from central Cairo to the new region with an aim to grow the population. Another advantage of this strategy is that it empties the buildings formerly occupied by public offices, which are mostly old palaces with cultural value. Once they’re gone, they will be refurbished to serve for cultural purposes.

The summit will run through today with more discussions taking place under the same theme. Sessions vary from transportation and architecture to building an inclusive urban ecosystem that responds to the needs of vulnerable communities.

Geneva-based NewCities Foundation, the host of the event, is an international nonprofit dedicated to making cities more connected and healthy. It holds major international events and conducts research in the sector.

This year’s summit was organized with co-host Incheon Free Economic Zone and the Incheon Metropolitan City Government. The foundation said in a statement that Songdo was chosen as the venue for its global recognition as “the world’s foremost smart, sustainable city-scale government.”