Israel is in love with its very own ‘Wonder Woman’

Israel is in love with its very own ‘Wonder Woman’ 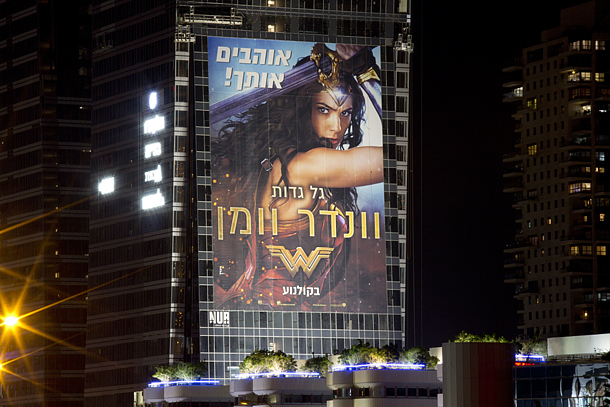 A billboard promoting the film, “Wonder Woman,” in Tel Aviv, Israel. For a country that takes pride in even the smallest successes of its international celebrities, the debut of Wonder Woman has sparked an Israeli lovefest for homegrown hero Gal Gadot. [AP/YONHAP]

JERUSALEM - For a country that takes pride in even the smallest successes of its international celebrities, the debut of “Wonder Woman” has sparked an Israeli lovefest for homegrown hero Gal Gadot.

A huge billboard overlooking Tel Aviv’s main highway is tagged with a provincial “we love you” greeting, her Hebrew-accented appearances in the international media are reported upon daily and throngs of fans cheer wildly upon seeing her on the big screen. Even Lebanon’s ban of the film hasn’t dampened the mood in Israel, where Gadot’s superhero status has been embraced as a national treasure.

“It’s so cool that someone from here is succeeding and is famous overseas. Everyone in the theater was so excited,” said 20-year-old Ela Hofshi of Jerusalem, who watched the movie on opening night.

Eager for diversions from politics and conflict with the Palestinians, Israelis often rejoice when one of their own breaks through on the international stage, whether it’s Omri Casspi in the NBA, medal-winning Olympic athletes or big-name model Bar Refaeli. But Gadot’s ascendance to stardom has entered a whole new stratosphere as she has assumed the identity of Wonder Woman in a box-office smash that raked in more than $100 million in its first weekend in theaters.

The role has instantly transformed Gadot into arguably the world’s most famous Israeli and the country’s most high-profile ambassador. In contrast to Refaeli, whose aloof demeanor, refusal to perform her compulsory military service and a tax-dodging scandal have alienated many Israelis, Gadot has been widely embraced. In interviews, she often speaks in accented English of her military service, a rite of passage for most Israeli Jews, which has made her even more beloved at home.

“She bears the burden of being Israeli with grace and you can see that fame hasn’t changed her,” said Ariel Oseran, 27. “She represents the ‘good Israeli’ and does us a great service. When she talks about the army, it shows that serving in the military is not a bad thing. It’s something inspiring. It makes every one of our female soldiers seem like Wonder Woman.”

Gadot, who performs her own stunts, has attracted fans with a public image that empowers women. For the film’s Los Angeles premiere, she showed up in $50 flats from Aldo rather than pricey heels. When asked, she responded “it’s more comfortable.”

Michal Kleinberg argued in a column on the Nana10 website that Gadot represented far more than mere national pride.

“This is not one of ours who managed to squeeze into a fashion show or an important competition, it’s one of ours in the most leading role a woman can get in a Hollywood film,” she wrote. “Gadot is objectively (really!) perfectly cast for the role. It’s not that Hollywood has a shortage of beautiful, fit, athletic brunettes, but an Israeli actress has something a Hollywood one doesn’t. As much as it sounds cliche, she offers a sort of chutzpah, spice and relatability.” AP