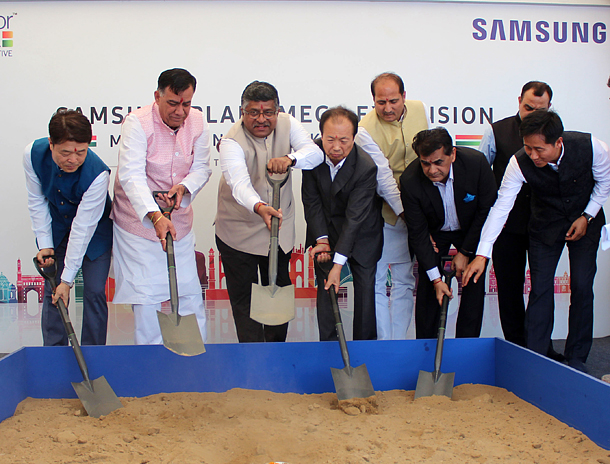 Samsung Electronics executives and Indian government officials break ground for a new factory for Samsung smartphones and home appliances in Noida in the northern state of Uttar Pradesh in India on Wednesday. From far left to third from right: Hong Hyun-chil, CEO of Samsung Southwest Asia; Satish Mahana, minister of industrial development in the government of Uttar Pradesh; Ravi Shankar Prasad, Indian minister of law and justice; and J.K. Shin, CEO of IT and Mobile Communications at Samsung. [YONHAP]

Samsung Electronics is spending 860 billion won ($766 million) to double its production capacity for smartphones and home appliances at its plant near New Delhi, India.

The company broke ground in Noida in the northern state of Uttar Pradesh on Wednesday local time on a plot of land that spans 35 acres, which it recently purchased near the factory currently in operation. The existing factory, which has been churning out smartphones, TVs and refrigerators, takes up 30 acres.

The 860 billion won Samsung has set aside for production expansion is 2.5 times what the company promised last October as it signed a memorandum of understanding with the Indian state. When the new factory is completed in the latter part of next year, the combined annual production volume for smartphones in the Noida production facilities will double to 120 million units.

Samsung’s move comes as India has become a crucial market for the tech giant. Some 10 percent of the world’s Samsung smartphones are made in India and 70 percent of those are locally sold.

India recently overtook the United States to become the world’s second-largest smartphone market after China. Thanks to its population of around 1.3 billion and low smartphone saturation rate, both Samsung and Apple, the world’s two dominant smartphone players, have been eyeing India after China.

Apple, whose iPhone business has been slowing down, began assembling its cheapest iPhone SE in India in May.

Hong Hyun-chil, CEO of Samsung Southwest Asia, told audience members at the ground-breaking ceremony that Samsung began rolling out its first TVs in June 1997 and ever since it has represented Indian Prime Minister Narendra Modi’s “Make in India” initiative, which encourages national and multi-national companies to manufacture their products in India.

“All TVs and mobile phones sold in India are produced locally,” he said, “and the Galaxy S8 Plus, the world’s best smartphone, is being made in Noida.”

Samsung entered India in 1995 and the Noida plant began operation in 1997 with TVs. Mobile phone manufacturing started in 2005.

India also has five R&D centers and one design center run by Samsung. The entire Samsung operations in India, including 150,000 retail stores and 3,000 after-sales service centers, employ about 70,000 local workers.