Scientist warns of IT challenges

Scientist warns of IT challenges 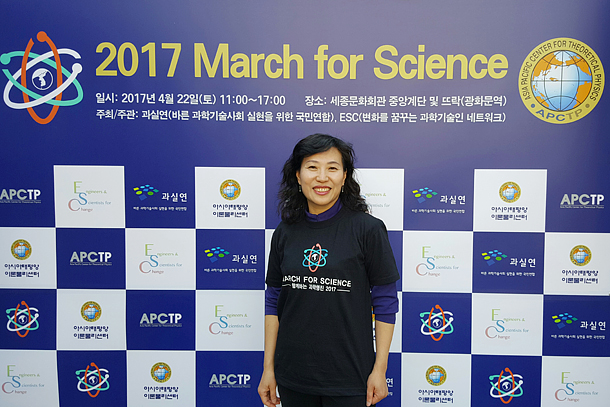 Park Ky-young attends the 2017 March for Science campaign in central Seoul in April. She published a book in May to inform and warn the new administration about challenges in the advent of the fourth industrial revolution. [PARK KY-YOUNG]

When Park Ky-young visited the Mobile World Congress in 2014, she could see the trend of technological innovation increasingly tied to government policies and regulations as well as society and culture in other advanced countries. But the phenomenon was far from relevant in Korea, even after the country’s creative economy initiative in the last administration.

Korea takes pride in being an IT powerhouse but the sector has undergone asymmetric growth due to lack of consideration to elements outside of technology, Park, the former secretary for scientific affairs under President Roh Moo-hyun, said.

“Korea’s future competitiveness will depend on how it complements the policy-wise and regulatory measures in the IT sector,” she said in a recent interview. “On top of the complementation, software and IT services also need to be reinforced,” she added.

Although the country’s industrial scene has extensively adopted robots and automation - mostly in manufacturing - sectors such as design, information protection and security that combine and take advantage of big data and software are few, noted Park, a longtime science and technology policy adviser.

These ideas led her to write a book titled “The Fourth Industrial Revolution and Competitiveness in Science and Technology,” which was published on May 10, the day after President Moon Jae-in’s election. The book gained substantial media attention for its two-page recommendation from President Moon, who served as chief of staff under President Roh.

“I wanted to inform and warn the new administration about an array of coming challenges in the advent of the year of the fourth industrial revolution, regardless of the next president, and to prompt constructive discussion on the issue,” she said, “by making evidence-based approaches to policies in the past administrations and comparing the outcome.”

Park, a biology professor at Sunchon National University in South Jeolla and science and technology-related civic activist for more than three decades, believes it is time that the Korean government recognize the importance of what works in policy-making. Evidence-based policy-making is what the American Association for the Advancement of Science, the world’s largest multidisciplinary scientific membership organization, has emphasized.

That’s why data and graphs take up a sizable portion of her 318-page Korean-language book. It compares science and technology-related campaign pledges of past administrations, reviews the Korean economy’s status quo, its excessive reliance on manufacturing, the size of investments in research and development and the results through myriad numbers.

After graduating from Yonsei University, the Seoul-born professor joined the YMCA in 1985. She was actively engaged in environmental protection movements but later realized the importance of science and technology as a biologist and went on to earn a doctorate in plant physiology. Before serving as science and technology tutor to President Roh, she advised his predecessor Kim Dae-jung.

In her book, Park takes issue with Korea’s excessive focus on efficiency during its rapid industrialization, which resulted in job cuts in manufacturing. Despite widespread predictions that the fourth industrial revolution would reduce employment in the field, manufacturing is a key pillar of the Korean economy, she said.

As a short-term solution, Park proposes the government make fresh investments in safety and defense to lay a cornerstone for beefing up hiring in manufacturing and encourage Korean manufacturers with facilities abroad to return, thus bringing back production jobs.

“The comeback of 10 percent of those Korean plants in China at best would contribute to creating 300,000 new posts here,” she said.

The time has come for Korea to ditch its focus on the traditional heavy chemical industry and to diversify industries that are based on innovation and centered on job creation, Park noted. Corporations need to get away from hierarchical structures and move toward horizontal ones, she said.

“Korea is so much immersed in its past glory of rapid industrialization that it finds it difficult to get out of its own trap that hinders new challenge,” she said.

“Koreans tend to mistakenly think that since the national economy has grown, science has developed at the same pace,” she said. “Science is about the accumulation of knowledge over time. We need to wait for it to bear fruit.”