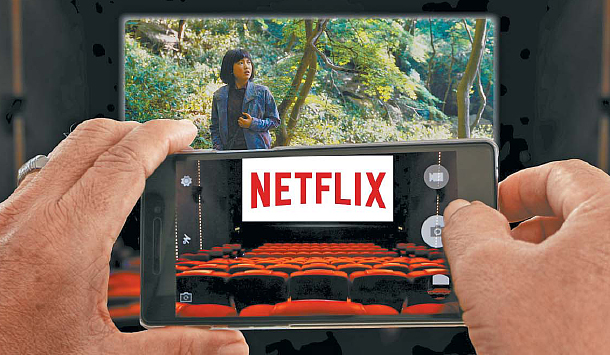 Controversy continues to follow Netflix’s “Okja,” even after all the commotion prior to its debut at the 70th Cannes Film Festival last month.

“Okja” faced backlash in France when it was invited to compete at the prestigious film event, as French cinema chains complained about the movie skipping a traditional theatrical release and heading straight to Netflix instead.

Though Netflix tried to be more open in Korea by simultaneously releasing “Okja” on both the streaming site and at local theaters, its decision has also seen pushback from the old guard of the film world.

Korea’s three major cinema chains - CGV, Lotte Cinema, and Megabox - have lukewarm attitudes towards “Okja,” despite it being directed by Bong Joon-ho, one of the nation’s most beloved auteurs, known for his award-winning films “Snowpiercer” (2013), “Mother” (2009) and “The Host” (2006).

Before heading to Cannes last month, Netflix announced that the film will become available to its users in 190 countries on June 29, Korean time. And Kim Woo-taek, CEO of Next Entertainment World (NEW), which will distribute “Okja” in Korea, told reporters that the film will simultaneously be unveiled in Korean theaters.

But three weeks ahead of its scheduled theatrical release date, Korea’s three major cinema chains, which make up more than 90 percent of the entire market, remain undecided on whether to screen the film. They are reluctant to premiere “Okja” on the same date as Netflix due to the fear of creating a precedent that disturbs the film industry’s traditional distribution order, a potential threat to the industry.

The traditional distribution of films usually begins in theaters and then moves to online platforms and on-demand services. The period between theatrical premiere and online release in Korea is three weeks - already a lot shorter than three years in France and 90 days in United States.

“We delivered our position to NEW last month that it would be difficult to screen ‘Okja’ at CGV if Netflix maintains its stance on the film’s simultaneous drop via online and theaters,” said Hwang Jae-hyeon from CGV Wednesday, the biggest theater chain in Korea.

“Though Netflix is acting as if the simultaneous theatrical release in Korea is some kind of a perk, we believe it is disturbing the film industry’s existing distribution order. We are concerned that Netflix is merely using ‘Okja’ as a means to lure more users [in Korea.]”

Hwang added, “We also deeply wish to screen the film at our theaters, and we are going to do our best to reach a consensus with [Netflix through NEW]. We hope [Netflix] respects the existing film industry’s values and distribution order that have led to the industry’s marked development over the last decades.”

The opening of a movie is usually decided two weeks ahead of its scheduled release date, and whatever decision CGV makes will be made by June 15, according to Hwang.

The market’s second and third players are expressing similar points of views regarding the screening of “Okja,” though their decision is likely to be influenced by CGV.

In response to the major cinema chains’ lukewarm attitudes, Lim Seong-rok from NEW said Wednesday, “We are well aware of and fully understand the cinemas’ stance, but it is too early to conclude that the film will not open in major theaters. We are currently doing our best to secure as many theaters as possible.”

Despite the heated debate, some film critics seem to be welcoming the outcome derived from the controversy sparked between Netflix and major cinemas.

“I personally view this positively. Though films have traditionally always opened in theaters, I believe having more diverse platforms to enjoy movies is a positive change,” said film critic Kim Young-jin.

When asked about the possible reason behind Netflix’s decision to release the movie in theaters and on the streaming site in Korea at the same time, Kim referred to the high barrier to entry Netflix has seen in the country. “Netflix is not as well-received in Korea as it is in other countries. And Netflix seems to be using the movie as a marketing strategy to lure more users in Korea, placing director Bong Joon-ho, who has high name value here, at the forefront.”

Another movie critic, Hwang Jin-mi, expressed a similar point of view about how the recent controversy could shed light on the monopoly that major cinema chains have in Korea.

“I believe the recent controversy could function as an opportunity to shed light on CGV’s market monopoly problem. It has been about 15 years since CGV has been dominating the market. For a very long time, if the cinema chain decided not to screen a movie, the film usually had very little chance of acquiring screens. But people haven’t actually paid much attention to this issue until ‘Okja’ became the center of it.”

Regardless of the effects of the recent controversy, the biggest benefactor of this fuss is definitely Netflix, according to film critic Oh Dong-jin.

“There is no clear answer on whether major cinemas should screen ‘Okja.’ But the clear winner of this controversy is definitely Netflix. Everyone has now gotten to know about the brand, and they are participating in the debate on what should be done.”

Regarding the possible change to film distribution in Korea, Oh said that it is very natural.

“Though [cinemas and Netflix] are currently struggling over the leadership of the film market, we can’t deny that the times are changing. ”

Meanwhile, the film’s stars - Tilda Swinton, Daniel Henshall and Giancarlo Esposito - will visit Korea to promote “Okja” next week. They, along with director Bong and their Korean co-stars like An Seo-hyun, will hold a red carpet event and a press conference on Tuesday and Wednesday.