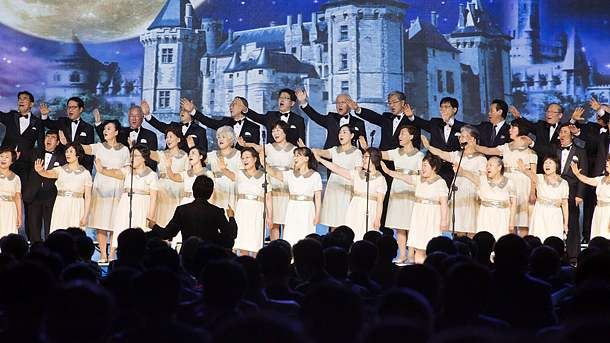 “Forever Young” is a music documentary that follows a senior choir. [WIDE RELEASE]

When people think of a choir, a determined group of senior citizens with an average age of 65 may not be the first type of performers that come to mind. But that is exactly what ASAA (Active Seniors As Always) is.

When the choir was formed in 2011 through the entertainment program “Qualifications of Men,” the group delivered heartwarming performances to the show’s viewers under the command of guitarist Kim Tae-won of legendary rock band Boohwal.

Though the program wrapped a few years later, the senior choir has remained together and has made a number of remarkable achievements, which are seen in the documentary “Forever Young” which will hit theaters next week.

Directed by Lee Hyeok-jong, the documentary looks at the accomplishments that the members of ASAA have made despite each member undergoing their own personal difficulties, including illness. One of the choir’s biggest accomplishments was staging a performance at the headquarters of the United Nations in New York in June 2015, which most of the choir members had thought was “impossible and preposterous” before they finally stood on stage.

“I had the thought of making a movie about ASAA after attending Boohwal’s concert, where the senior choir performed. I didn’t know they had stayed together, and I was deeply moved by their passion for singing,” said the filmmaker.

“While pointing the camera lens on the choir for two years, I attempted to focus on delivering the members’ passion and the dreams they have [about singing]. I wanted to show positive energy and a sense of hope that dreams can come true to the audience,” Lee said.

“Forever Young,” which runs for 78 minutes, will be released on June 15. It is rated for all.