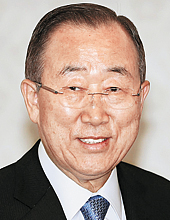 Former UN Secretary General Ban Ki-moon will begin his tenure as distinguished professor and emeritus director of the Institute for Global Engagement at Yonsei University from July.

“The Institute for Global Engagement was established in April at the university to coordinate among students and professors activities including global and domestic missions and volunteer programs,” said Nam So-hyeon, a PR official at Yonsei University in western Seoul.

“It’s not yet decided what Ban will be teaching at the university.”

The university is also planning to open a sustainable growth center once Ban begins his tenure.

“His participation at the center will bring about advances in its climate change research.”

Ban has been teaching at Harvard University as the Angelopoulos Global Public Leaders Fellow since April.

He is an Edward S. Mason Fellow alumnus of the Harvard Kennedy School (HKS).

Ban will return to Korea on July 3, one day before his tenure begins at Yonsei University.