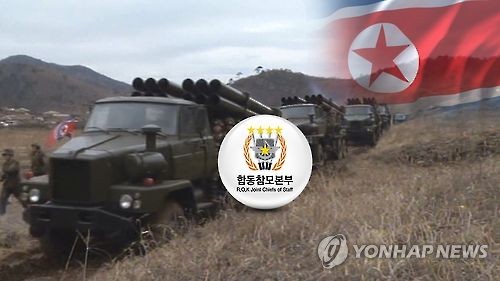 North Korea launched a salvo of anti-ship cruise missiles from its east coast Thursday, South Korea's military said, adding they flew some 200 kilometers before dropping in the East Sea.

"North Korea fired several unidentified projectiles, assumed to be surface-to-ship cruise missiles, this morning in the direction of the East Sea from the vicinity of Wonsan, Kangwon Province," the Joint Chiefs of Staff (JCS) said. "The flight distance is around 200 km."
The JCS said the South's military has beefed up surveillance and vigilance against the possibility of additional provocations, maintaining full preparedness.

It marked the North's fifth-known round of missile firing since the launch of the South's liberal Moon Jae-in administration in early May. Moon has hinted at an intensive push for easing military tensions and improving inter-Korean relations.
The communist nation fired a Scud-type ballistic missile from Wonsan on May 29, which can apparently be used against both ships and ground targets.

In Washington, the U.S. missile defense chief voiced worries about the pace of development in the North's missile program.
"It is incumbent upon us to assume that North Korea today can range the United States with an ICBM carrying a nuclear warhead," Vice Adm. James Syring told a congressional hearing.