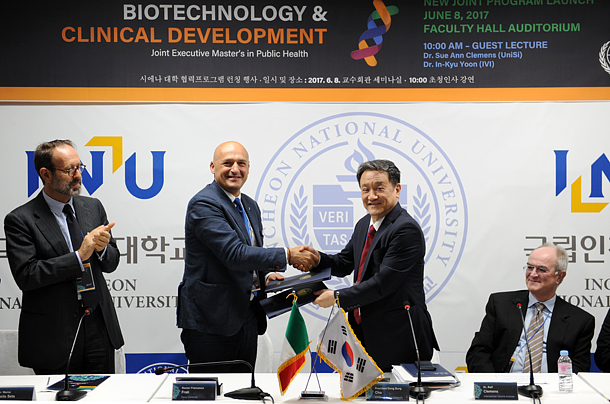 Incheon National University president Cho Dong-sung, second from right, and University of Siena rector professor Francesco Frati, second from left, after signing a memorandum of understanding to launch the joint executive master’s in public health. The joint program will aim to train public health, as well as vaccine and immunology, experts in Asia to cope with growing health concerns such as epidemics around the world. [INCHEON NATIONAL UNIVERSITY]

Incheon National University (INU) of Korea and the University of Siena (UniSi) of Italy will join forces to offer an executive master’s degree in public health. The joint master’s program, announced on Thursday at INU’s campus in Songdo, west of Seoul, will provide intensive education on subjects such as immunization in an attempt to create public health experts in Asia.

“Public health is not just a domestic concern,” said professor Cho Dong-sung, the president of INU, at the press conference on Thursday. “The scope of epidemics is not limited in a single region anymore but the entire world, which means students [of public health] must be a global expert that can apply their knowledge anywhere in the world.”

The president explained that Songdo is an international hub, connecting Korea to the rest of the world, and as a university located in such city, it is its duty to provide a program that targets students not just in Korea but around the world. President Cho also explained such a program is necessary in Asia to promote regional cooperation in defending people against epidemics and creating necessary policies.

Songdo is also a leader in the biopharmaceutical industry, with its yearly output capacity standing at over 300,000 liters (79,252 gallons). Leading biologics and biosimilar companies, such as Samsung BioLogics and Celltrion, are located there. Together, the companies in Songdo plan to expand production capacity to 670,000 liters by 2021, which would make it the largest biopharmaceutical city in the world.

According to INU, candidates will spend one year each at INU’s campus in Songdo and the campus of UniSi in Siena, Tuscany. They will receive a joint degree from the two universities upon completion of the program. The program will contain courses on biologics, biochemistry, immunology and vaccination. “Students will be equipped with new skills in biologics and vaccinology research, evaluation and manufacturing … to make significant contributions to the control of infectious and non-infectious diseases,” said INU in a statement.

UniSi, founded over 700 years ago, currently runs 10 different modules in public health and has a tradition of strong medical and life science research. “Italy, along with Germany, is the first producer of drugs in Europe,” said UniSi rector, Professor Francesco Frati. “The master’s program we are launching today [is out of] the need of new generation of scientists to focus on coping with emerging diseases.”

Along with courses on medicine and life sciences from UniSi, the joint program will also offer lectures by experts from prestigious think tanks and institutions worldwide, including the World Health Organization, University of Oxford, Yale University and the Bill & Melinda Gates Foundation.

“IVI is proud to be part of this new master’s program,” said Doctor Ralf Clemens, a member of scientific advisory group at IVI. “IVI firmly believes in the value of this new venture, and as one of the institutions that does courses in vaccinology, the new program will benefit [from IVI’s educational expertise].”