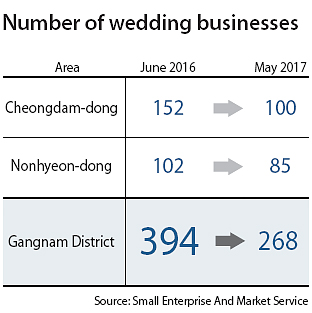 The once famous Gangnam wedding halls are now experiencing financial hardship and shuttering their doors as fewer people are getting married and those who are have a different idea about how to do it.

On May 12, the well-known La Luce wedding hall in Nonhyeon-dong, Gangnam District, Seoul, shut its doors after being exposed for committing bill fraud. La Luce was a large-capacity wedding hall that featured three banquet halls, two wedding halls and an underground parking garage. “With a precipitous drop in sales due to the recession, coinciding with the bill fraud, there was no other choice,” an employee at the business said.

One 40-year-old employee of another Cheongdam-dong wedding hall committed suicide on May 30. The police say the man complained of stress. He overdosed on sleeping pills and left a suicide message saying “I’m sorry because I couldn’t live up to expectations.”

About 30 percent of the 394 Gangnam wedding businesses have closed since June, according to the Small Enterprise And Market Service, a division under the Ministry of Trade, Industry and Energy. Industry watchers say the market has become uncertain due to the yearly waning demographics in weddings. Instead, small weddings of about 50 to 100 people at restaurants, public spaces and people’s homes are becoming more popular.

Lee Hang-ju, 30, had his wedding at a restaurant in Jongno District on May 20. He invited 70 people.

“Rather than a busy wedding involving hundreds of people I didn’t know,” Lee said, “I wanted to hold a wedding at a small space with the people we cherish.”

According to the Ministry of Gender Equality and Welfare, the number of public spaces where small weddings were held grew from 132 in 2013 to 231 this year. Last year, 1,632 couples held weddings at these locations.

Governmental aid for these weddings is available. On the other end of the spectrum, the demand for luxury hotel weddings is larger than ever. This is partly due to the YOLO phenomenon, according to The Seoul National University Consumer Trend Anaylsis Center and Kim Nan-do, a consumer studies professor. YOLO is an acronym for “You only live once.”

“Speaking frankly, it was a burden to put up a year’s worth of salaries for a wedding that would last an hour,” said one 31-year-old office worker, who had held a wedding in February at the Grand Ambassador Hotel at Jangchung-dong, central Seoul. “A wedding takes place only once, so I wanted to give the best gift possible to my wife. I have no regrets.”

“Although the entirety of the wedding industry is experiencing a period of stagnation due to the economic recession,” said an employee at Banyan Tree Club and Spa, “there isn’t much difference in demand for hotel weddings. Dozens of inquiries have been steadily coming in for weddings at our outdoor swimming pools, which are considerably expensive.”

With Gangnam wedding halls losing their luster, related businesses are experiencing a direct hit. According to employees at large-capacity weddings halls, these venues also run hanbok rentals, floral decorations and other businesses for the industry due to the costly rent. If one wedding halls closes down, all these businesses are also hit.

“The demand for hanbok is declining sharply with the increasing practice of omitting pyebaek [a traditional Korean wedding custom in which the newlyweds honor the groom’s parents],” said Oh Won-seob, an employee at one hanbok business in Cheongdam. “If there were 100 customers five years ago, there were 30 three years ago and now it’s close to zero.”

“Photo studios are experiencing pricing competition with the drop in customers,” said one 45-year-old surnamed Kwon, an employee of a photo studio in Nonhyeon-dong, Gangnam District. “The hundreds of Chinese customers who came in groups all disappeared since the retaliatory measures by China against Korea last year, and now the store may have to close.”