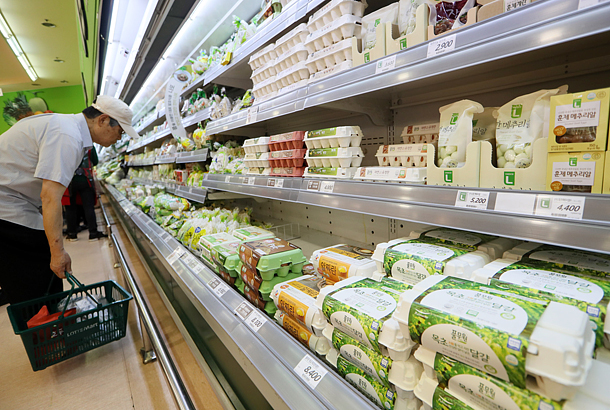 A shopper picks eggs at a supermarket in central Seoul on Tuesday amid a new outbreak of avian influenza. [YONHAP]

With avian influenza having made a comeback in Korea last weekend, consumer sentiment is uneasy regarding the price of poultry products, from eggs to fried chicken.

The consumer price of a tray of 30 eggs was 7,967 won ($7.08) on Friday, according to data from the Korea Institute for Animal Products Quality Evaluation. This is 59 percent higher than the price on June 9 last year.

Egg prices soared up to 9,000 won in mid-January after the winter’s A.I. infected millions of layer hen.

Prices fell below 8,000 won in February but remained above 7,000 won in the following four months. In early December, before the breakout, prices for 30 eggs were in the 5,000-won range.

A report from the Korea Rural Economic Institute said that the number of layer hens would normalize to 90 percent by September, but this estimate was made on the premise of no further flu outbreaks. The recent H5N8 virus strain didn’t touch layer hens but spread mainly among ducks and chicken farms. Still, if the government fails to treat the disease in its early stage, there’s possibility A.I. will eventually reach them.

Prices for fresh chicken have been stable. Some say the effect won’t be as critical as last year because most of the infected farms detected until now are small operations that don’t grow poultry en masse. The nation’s top three discount chains also said they do not plan for a price hike.

On top of that, the country’s top fried chicken franchises are increasing prices.

Industry leader BBQ Chicken raised prices of 20 menu items this week by 900 to 2,000 won, pushing the cost of some products above 20,000 won. BBQ raised prices on 10 of its most popular menu items in early May about 10 percent. The company said Friday that it will not raise prices of the remaining products.

BBQ explained that the recent hike was already decided, but that they divided the hike twice considering resistance from consumers.

Fried chicken is the most popular delivery food in Korea, and it also has a symbolic meaning as the dish of the common people.

As the market leader, BBQ’s price increase raised doubts that others in the market would follow suit. Kyochon Chicken, the No. 2 fried chicken franchise, also announced it would raise prices by the end of this month. KFC lifted prices of several popular menu items last week.

Fried chicken companies cited the increase of operating costs for franchisees including wages and rents for the decision.

In fact, this is the first time BBQ and Kyochon have raised prices since 2009 and 2012, respectively. The advent of delivery apps that connect franchisees with consumers and charge commission fees emerged as a new stream of revenue. “The apps did increase the number of orders, but the costs that flows out for commission is larger,” said an industry source.

Critics say that fried chicken brands used the A.I. outbreak as a good excuse to raise prices although they are not directly hit by the shortened supply. Franchises normally sign contracts with chicken processing factories annually, therefore short-term price fluctuations don’t affect them.