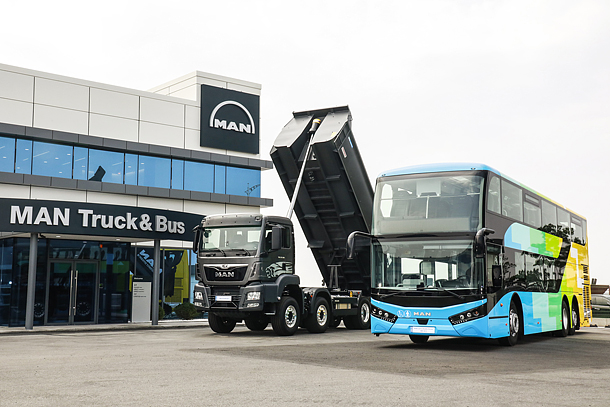 Built with a $10 million investment, the facility will store and inspect imported vehicles before they are delivered to clients. The company said the center will help it better respond to growing demand for commercial vehicles in Korea. Earlier in March, MAN Truck opened a Korean headquarters in Yongin, Gyeonggi, with another $10 million investment.

“We will try to become a No. 1 leading import commercial vehicle company in Korea,” said Max Burger, president of MAN Truck’s Korean operation, at a media event on Friday at its new inspection center. “[The facility] will enable fast delivery of more trucks. We expect the storage and delivery to keep up with the increasing demand in Korea.”

The pre-delivery inspection center sits on a 28,969-square-meter (311,820-square-foot) site and comprises five buildings. It is six times larger than the previous center located in South Chungcheong, which has been closed.

Two of the buildings are equipped with 16 double work bays dedicated to auto parts assembly and inspection. The others are dedicated to storing complete trucks and buses and training staff.

On Friday, the German company also unveiled its “MAN Lion’s Double Decker” vehicle, a two-story bus that runs on a diesel engine. Design and manufacturing of the double decker, including its electronic power unit and chassis, were overseen by German headquarters, and the bodywork was done in Spain.

The bus can hold 73 seats, but depending on customers’ needs, it can be adjusted to as low as 50 for more spacious seating, a company spokesman said. The lower capacity might make it ideal for tour buses, he said.

The MAN Lion’s Double Decker will be used on long-haul bus routes in Gimpo and Ansan in Gyeonggi. The company has received 52 orders for the bus so far.

Burger said that although Volvo Trucks may have the upper hand in the Korean market given its earlier entry in 1997, MAN Truck is gaining a foothold here and will continue to invest in response to growing demand for commercial vehicles.