Cartoonist captures the faces of people he meets abroad

Cartoonist captures the faces of people he meets abroad 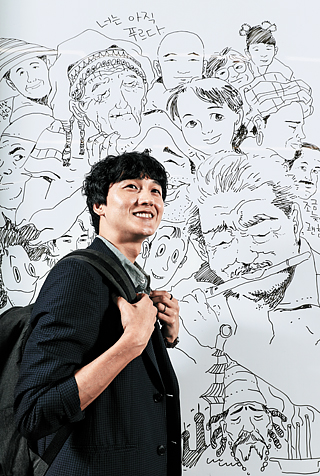 Cartoonist Kim Dong-beom in front of his caricatures of the people he met while traveling. [KIM HYUN-DONG]

Known by his pen name ddonggae, or mutt, 39-year-old Kim Dong-beom, is known for gifting caricatures of the people he meets while traveling abroad. All he asks for in exchange is a picture of his patrons holding their caricatures.

His sketchbook is filled with the faces of ordinary people living out their lives, whether they be an elderly man relaxing alongside a Bangkok road, a child enjoying a moment of solitary play behind a crumbling building or a mendicant monk seeking alms on a Laotian curb.

Having traveled to Southeast Asia and South Asia twice a year for the last ten years, Kim now has hundreds of caricatures in his possession.

Kim recently published a compilation of his sketches while traveling abroad, “It’s okay if it’s a little late,” and held an exhibition on his work in March at the Gwanghwarang art gallery in Gwanghwamun, central Seoul.

“[Southeast Asia] is a place that overflows with compassion and exudes humanity,” he says.

Except for Brunei, he’s been to every country in the area and considers it his second home.

Kim was born the youngest child of a poor family and went into construction. One day, he decided to travel to Nepal and there he found a moment of serendipity.

A graduate of Jinju Mechanical Technology High School, he never attended a hagwon, or cram school, and was accepted to the Korea College of Media Arts for cartoons and movies through self-study. After matriculating to Sejong University for cartoon animation, he became a cartoonist in 2009.

His mother nicknamed him ddonggae hoping he would have a healthy and long life, as he was physically frail in his youth - Korean people in the past believed a vulgar name would act as a deterrent against evil spirits. Now it’s his pen name.

“When I saw the people of Nepal making the most of their lives in the moment, I realized that there’s a lifestyle like this,” says Kim. “It became an opportunity to backtrack from living my life for money and success. How to live for the moment’s happiness became the theme of traveling afterwards.” 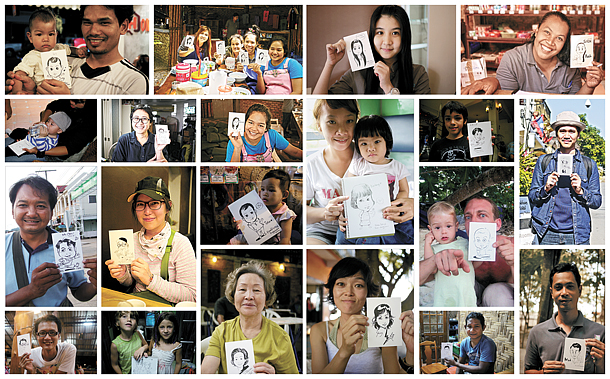 He claims a person’s life experiences are written on one’s face and his sketches are concerned with fleshing out those moments with his pen.

“Since elderly people in Southeast Asia farm their whole lives, their faces are tanned and though they may have deep wrinkles, their peacefulness in their acceptance of life as it is, is written on their face,” says Kim. “They end their hard day’s work and their appearance is even reverential, as if they’re in prayer. They only worry about what they have to do today. They’re not impatient and don’t worry about tomorrow. If I draw their faces, I come to reflect on how to grow older.”

Of the most memorable face’s Kim has drawn, he recalls two moments - a Cambodian teen tracing the face of a Buddha in the earth with tree branches, and the face of a Nepalese girl drawn at the request of her young crush.

“When I handed over the notebook and pen I carried around after drawing the girl’s face, he went running to his house to show his parents,” says Kim. “I felt just how much we had at that moment. I can’t forget how the girl hugged me.”

He adds, “When it became an era where thinking became bothersome, thoughtful cartoons disappeared. Even if I was given a yearly salary in the hundreds of millions of won, I’d have no desire to become an internet cartoonist. I don’t think one’s quality of life will be higher just because one earns a lot of money. If I earn enough as a university lecturer as I do now, I want to live pursuing the happiness of the now. For that reason, I have to travel far more.”