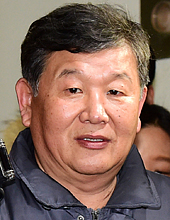 President Moon Jae-in brought back a longtime public servant on Friday, who was ousted by former President Park Geun-hye for having refused to collaborate with her confidante, and made him a vice minister.

Moon appointed five vice-minister-level officials and among them was Roh Tae-kang, a former senior official of the Ministry of Culture, Sports and Tourism. Roh was reinstated and appointed to serve as the second vice minister of the ministry.

Roh was forced to leave the public service after Park personally labeled him a “bad person” over his report that pointed out problems concerning special treatments given to the daughter of Park’s confidante, Choi Soon-sil. The daughter, Chung Yoo-ra, is an equestrian athlete.

In August 2013, Roh, then the director of sports, created a report after investigating the Korean Equestrian Federation and raised suspicions about a senior executive, who was a close associate of Choi. Park’s condemnation followed, and Roh was sacked and then sent to work at a museum. He was forced to retire from the public service last year after Park questioned why he was still working for the government.

Park was impeached and removed from office in March for allowing Choi to influence state affairs for private gain. Park and Choi were prosecuted over the charges and are now standing trial.