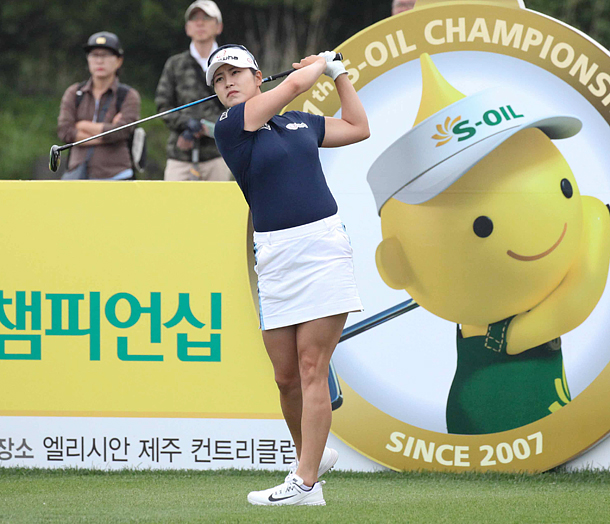 Kim Ji-hyun during the final round of the 11th S-OIL Chapionship at Elysian Jeju Country Club on Sunday. Kim defeated Lee Jeong-eun in the fifth playoff hole to win her second tournament of the season - and her career. [KLPGA]

Kim, who started the final round two-shots behind the leaders, got off to a great start with a birdie on the first hole, par-four. Rather than an aggressive play, Kim stayed consistent throughout the round, focusing on making birdies on par-fives and on the others, playing at least pars.

She made birdies on all the par-fives and made three additional birdies on par-fours to take the sole lead. Once Kim finished her round, she held a one shot lead over Lee Jeong-eun, the 2016 rookie of the year and winner of the 2017 Lotte Rent a Car Ladies Open. But with Lee’s birdie on the last hole, the play was extended to a sudden-death playoff.

Up until the fourth playoff hole, it was hard to tell who was going to win as the two continuously made pars. During the fourth play-off hole, Lee was given an opportunity to win, sticking her second shot as close as a six footer, but she missed her short putt, and Kim was given another shot.

On the fifth hole, Kim stuck her second shot six feet from the hole, whereas Lee had a long putt for a birdie. Although Kim didn’t make her short putt for birdie, and since Lee missed her par putt, Kim was declared champion.

“I’m glad my second KLPGA tour victory came in earlier than expected,” Kim said after the round, as quoted on Yonhap. “My goal was to become a multi-winner and I achieved that today.”

Kim is having the best season of her career since she first turned professional in 2009. Up until the KG Edaily Ladies Open with KFC at the end of April, Kim was a golfer who has never won a tournament in all her eight years of playing on the tour. But within less than two months, Kim has now become the KLPGA tour’s second multi-winner of the season, after Kim Hae-rym.

The other Kim Ji-hyun, who won the Lotte Cantata Women’s Open last weekend, finished third, shooting a round of 68, four under-par, in the final round. Hong Yoo-yeon, who finished tied for eighth, shooting a five-under par in the final round, had a hole-in-one on the 16th hole. Jang Ha-na, who played in the event for the first time in four years, ended up finishing tied for 29th with an even-par round on the final day.

Oh Gyeong-eun, one of three amateurs in the field, finished tied for 12th. And Seong Eun-jeong, who received the most attention as an amateur, missed the cut.