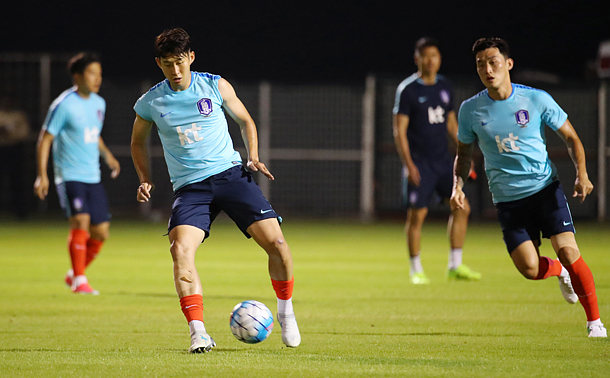 After a week in the United Arab Emirates, the Korean national football team, led by head coach Uli Stielike, arrived in Qatar on Saturday at around 5 p.m. for their upcoming final 2018 FIFA Russia World Cup qualification match against Qatar.

Due to Qatar’s poor diplomatic relations with other Arab nations, it took the Korean national football team over five hours to reach the country, having to make a stop in Kuwait, rather than a direct one hour flight, to get to the capital city of Doha on Saturday. As a result, the team canceled their practice session.

According to the weather forecast, the temperature in Doha on game day, Tuesday, will reach up to 44 degrees Celsius (111.2 degrees Fahrenheit).

“We spent a week training in UAE preparing for the heat in Qatar,” Stielike said at the airport. “We played in a tune-up match and our players found it difficult. So in the remaining time, we’ll prepare as much as we can for the heat.”

Prior to their arrival in Doha, the team got to experience playing in such heat in a tune-up match against Iraq, ranked 120th in the FIFA World Ranking.

Since it was almost their first time playing in such heat, most of them struggled, but Nam Tae-hee of Al-Duhail SC found it most difficult.

“I’ve been in the Middle East for six years but the hot weather has always been difficult for me,” Nam said after the match. “This is my first time playing in June.”

Although Nam won the Qatar Stars League’s MVP award for the 2016-17 season and played in Qatar for six seasons, he considered the tune-up match difficult as he had no experience playing in June.

Unlike the regular football season, the Qatar Stars League starts in September and ends in April to avoid the heat wave from June to August. Starting in June, the temperature reaches up to 40 degrees Celsius in the afternoons, and in August, it goes up to 50 degrees Celsius.

“The heat will definitely be an important factor in the qualification match,” Nam said.

A scoreless draw was a disappointing result, but Stielike showed a sense of satisfaction with having had a chance to experience playing in Middle Eastern heat.

That said, the heat can no longer be an excuse for the team’s poor performance.

“Our first goal was to adapt to the local environment,” Stielike said. “From our tune-up match, our players got to adjust to the weather. In tactical parts, we’ll have to analyze further.”

The heat is something the team must overcome to advance to the World Cup for ninth consecutive time. With three games remaining in the final group qualification match for the 2018 Russia FIFA World Cup, Korea has to earn three points to assure their second spot in the group, as they are only one point ahead of Uzbekistan in Group A.

“I have no other thoughts than to win against Qatar and earn three points,” Stielike said.

The match will be broadcast live on JTBC and JTBC3 FOX Sports at 3:45 a.m., Korea time on Wednesday.