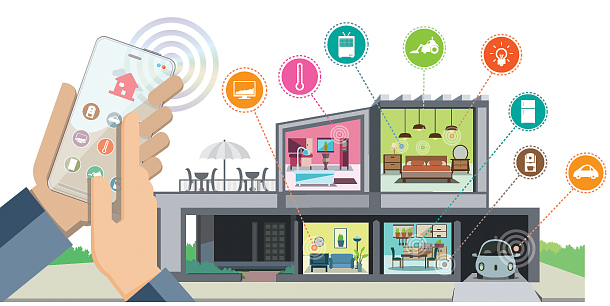 Imagine you’re heading home from work, and as you get close to your apartment building, a message pops up on your smartphone asking if you want to turn on the lights. You click “yes,” and when you get home, the lights are on.

At the main entrance of your apartment building, the door opens without you having to reach for your key card. The elevator is already heading down to the first floor, thanks to a camera that detects your entry into the building.

When you get to your apartment, the curtains come down as soon as you step in. The coffee machine, right on cue, starts grinding the Guatemalan beans you ordered a week ago. The thermostat adjusts the room temperature to your liking; a mild breeze flows from the air-conditioner.

As you’re taking off your shoes, you ask your voice-activated virtual assistant smart speaker to turn on the news, and the television switches to the news channel. The main story of the day is worsening air pollution. You tell the assistant to turn on the air purifier, and it obliges.

Then off to the shower, where the water turns on automatically. While you’re washing up, the apartment’s smart home system tells you your car is entering the building’s parking lot, letting you know your spouse has returned from work.

After your shower, you head to the refrigerator to grab something to eat. It tells you that you’ve run out of eggs, and you immediately place an order for more on the fridge door’s digital screen.

You pick up the coffee that has been brewing the whole time and slip into the sofa as your spouse walks through the apartment door.

The future is nigh

While the story above might sound like the stuff of science fiction, the technologies described already exist and will be available in so-called smart home apartments being built by Hyundai E&C at its Hillstate complex in Dongtan, Gyeonggi. The apartment began accepting buyers last June, and 29,000 residents will be ready to move in by February 2019. The homes are a collaboration between Hyundai E&C and leading Korean telecommunications provider SK Telecom. According to the companies, the smart home services are based on machine learning technology where devices can analyze residents’ data, including location information, daily habits and even sleep patterns, to customize service for the convenience of residents.

Just 10 years ago, a lot of this would have been unthinkable. Back then, the most modern features in a home were electronic keypads that could lock and unlock doors, and touch-screen displays that showed who was at the door and could ring them in. Now, both devices are ubiquitous in Seoul apartments to the point of being passe, a testament to how quickly home technology has developed in the past decade. Televisions, too, have become smarter, giving viewers access to a wide variety of on-demand entertainment and the ability to shop through a remote control.

But if the previous wave of home technology was about giving residents the option to digitally integrate their home devices, the next wave is about making those machines work for each individual’s needs. It’s the difference between an air purifier that can assess the environment around it and an air purifier that can analyze and then adjust its settings automatically based on the user’s preferences.

So far, most consumer electronics in smart homes, whether they’re TVs, humidifiers or robotic vacuum cleaners, are controlled through smartphones, says Chung Joon-hyuk, a professor at Hanyang University who specializes in deep learning, a core concept in artificial intelligence. This means devices still rely on the command of humans, while a truly “smart” home, the professor argues, would have devices executing functions on their own.

Chung believes we are in the midst of a transition from smart homes capable of only connecting devices to smart homes that can work for us, largely thanks to rapid developments in artificial intelligence.

“At the current stage, the smart home is like the hotel maid that cleans your room and takes out the laundry,” he said. “Then it moves up to becoming an assistant that helps you out in every aspect of your life, but in the end, it will get to the point of becoming a guardian. It will be like your life partner, where it’s not only a vacuum cleaner cleaning the floor but also relates to you and makes conversation.”

While one can point to any number of dystopian speculative fiction works involving sentient computers, Chung believes they will play a crucial and positive role for an aging society like Korea’s where the number of senior citizens living alone is increasing. 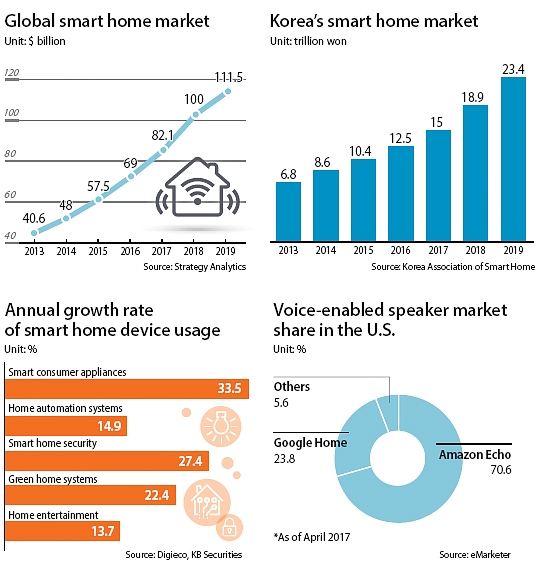 Many analysts believe the smart home market has enormous potential for growth because it is still in its early stages and there is no clear dominant player.

“The smart home industry has passed its infant stage and is now in the maturing stage,” said Christian Kim, senior analyst on IoT and connectivity at market research firm IHS Markit. “Currently, the market is fragmented and too disorganized for one specific technology to be leading the rest because there are many solutions that allow smart devices to communicate with each other.”

According to a Strategy Analytics report, the global smart home market has been growing at an annual rate of 18.4 percent. The market, which was worth $40.6 billion in 2013, is expected to double to $82.1 billion by the end of this year and expand to $111.5 billion by 2019.

In 2015, the Korean government announced it was investing 98.9 billion won on converging Internet of Things technology such as wireless sensors with existing industries including home appliances, energy, health care, automobiles and manufacturing. Under the plan, the government is covering 75.8 billion won and the remaining 23.1 billion won is coming from the private sector.

The local smart home market, however, remains led by major businesses. “There are not many companies listed on the Kosdaq [which tend to be smaller] that are detected to be venturing into the smart home business,” said Kim Chul-young, an analyst at KB Securities.

Kim said the smart home market is centered largely on conglomerates because they already make consumer appliances with internet connectivity. Therefore, it would be less profitable for smaller companies to jump into the market.

Some small firms only sell devices imported from China. Seojin Network is one of them. The Korean company specializes in connectivity products like routers and LAN cards. In December, it signed a contract with a Chinese smart home developer, BroadLink, to sell its smart home devices in the Korean market.

“Considering the market situation, we thought there would be potential selling smart home appliances,” said David Lee, technical sales manager at the company. BroadLink products will be available in the Korean market starting in September.

Other major Korean companies like Samsung and LG are either collaborating with global companies or acquiring them. The most notable move was Samsung Electronics’ acquisition of American start-up SmartThings for $200 million in 2014.

SmartThings’ key product is the Hub, a router-like box that can connect different third-party smart devices and make them work together, almost like a digital translator for products.

On his blog after his company was sold to the Korean tech giant, founder Alex Hawkinson wrote, “It has always been our goal to create a totally open smart home platform that brings together third-party developers, device makers and consumers. We’re thrilled that Samsung fully supports this vision.”

Currently, the product is only available in the United Kingdom and United States. According to a Samsung official, the Hub isn’t being sold in Korea because the market for DIY smart homes is relatively small compared to the U.K. or U.S. especially since Koreans live in apartments already embedded with smart technologies.

Speaker of the house

Market analysts believe 2017 will be a pivotal year for the smart home market, and perhaps the biggest driver is speakers that run on artificial intelligence. These speakers act as virtual assistants for the home and can respond to a user’s voice, answering questions like “What is the weather today?” and following commands like “Play music.”

Ever since Amazon introduced its smart speaker, Echo, in late 2014, sales of the device have significantly grown. Different estimates pin sales at somewhere between 7 million and 11 million globally.

Most of the sales have been made in the United States, according to Morgan Stanley’s research. Amazon dominates the market with 70.6 percent market share in the U.S. alone, according to an estimate by eMarketer. Runner-up Google has a 23.8 percent share with its Google Home service, and it’s quickly catching up to Echo given it was only released last November.

Apple has also thrown its hat in the ring. Last week at the company’s Worldwide Developers Conference, it unveiled the HomePod, a speaker that will work in tandem with Apple’s HomeKit, a platform that allows hobbyists to build their own smart gadgets. The speaker will run on Siri, the same feature found in the iPhone.

Market observers believe the HomePod is an entry point for Apple into the larger smart home realm. Philip Schiller, Apple’s senior vice president on worldwide marketing, noted the speaker’s home assistance feature can read and send messages; receive updates on sports, news and the weather; and control smart home devices by switching lights on and off and closing and opening shades, all through voice command.

In Korea, telecommunications companies have been releasing their own smart speakers, SK Telecom with Nugu and KT with Genie. Samsung is expected to enter the race by applying its Siri-like AI system Bixby.

Some tech companies have focused on developing products with the goal of improving life for senior citizens living alone.

One of the companies is Softbank Robotics in Japan, where the population is among the world’s fastest aging. At the Mobile World Congress earlier this year, the company’s sales director, Nicolas Boudot, said it was working on a software platform that would help its famed humanoid robot, Pepper, tend to senior citizens’ needs through Android-powered apps.

Korean companies have also been working on smart devices that can help with elderly care. Like Japan, the country faces the challenge of a quickly aging population.

SK Telecom is hoping to introduce a “silver care service” in partnership with the state-run LH Corporation. The service would install a sensor in a senior citizen’s home and alert family members when there is no human activity detected for more than 12 hours or when electricity and water use drops significantly.

LG U+, another telecom company, announced last year it was working with Samsung Electronics to develop a refrigerator that will send alerts to family members when the door is unused for more than 12 hours.

However, these technologies are still at a stage where they can only monitor senior citizens rather than be a companion to them.

The smart home market still faces the hurdle of consumer accessibility. Kim Chul-young, an analyst at KB Securities, said full adoption of the smart home will require prices to go down first, which could take some time.

“Consumer appliances are starting to be connected with smartphones,” Kim said. “But last year, an LG smart refrigerator was being sold for around 6 to 7 million won. It would have to drop to 2 million won for consumers to start opening up their wallets, which could take another two or three years.”

Price is not the only factor holding back wider adoption of smart homes. There are also critical concerns about security.

In October, popular websites in the United States, including Twitter, Netflix, Spotify and The New York Times, were paralyzed after a DDoS, or denial of service, attack. Experts said the attack was made through Internet of Things-connected devices, which were easy to hack.