The Galaxy S8 review you’ve been waiting for

The Galaxy S8 review you’ve been waiting for 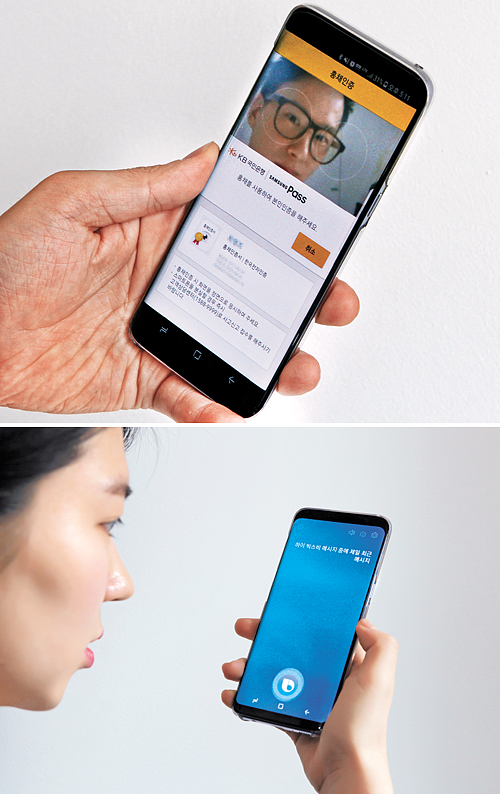 Samsung Electronics’ redemption after the Galaxy Note7 fiasco rests on the tech giant’s new release: the Galaxy S8 and the Galaxy S8+ that launched in April.

Having used the phones for the past month, two Korea JoongAng Daily reporters noticed major inconsistencies in the flagship phones’ most anticipated feature, Bixby, despite overall satisfaction with the bezel-less display and sleek design, as well as its iris scanner and camera. 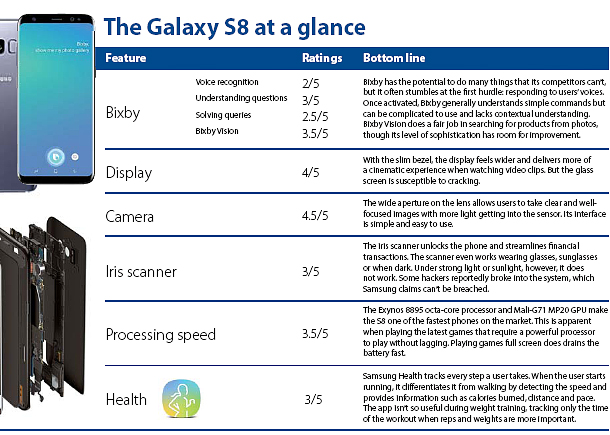 As Samsung’s answer to Siri and Alexa, Bixby became available on May 1 in Korea, though its English version has yet to arrive.

The new voice-activated assistant is like a jack-of-all-trades who struggles to get the most essential work done even with its versatility. It is capable of handling hundreds of tasks not only in Samsung-tied platforms but also in third-party apps like KakaoTalk mobile messenger, but fails too often to pick up the user’s voice.

Most of the time, Bixby did not launch in response to the verbal cue: “Hi, Bixby.”

It sometimes popped up and responded to random songs and footage on the phone or the voices of others.

“It is early in development and will keep improving through deep learning and software updates,” a spokesperson at Samsung said about the glitches.

Bixby’s promise for hands-free interaction also fell short of expectations because the user must manually unlock the screen before initiating the voice assistant.

This means that if you use screen lock you can’t just wander away from the handset, and abruptly ask Bixby to do something. You must go to the phone and physically unlock it, possibly using one of the biometric scanners.

In an upgrade this month, Samsung suggested consumers use Google’s Smart Lock system to bypass the lock screen in select locations.

Still, the Smart Lock was not smart enough to recognize locations. The lock screen kept popping up at home in spite of a setting that should have bypassed it in the house.

Even if the Smart Lock system improves, the current mechanism will limit the use of Bixby for settings such as driving.

These initial shortcomings should not overshadow the potential of the headline feature.

We were impressed by the range of available tasks completed by the assistant beyond basic functions like setting alarms, making a call and displaying the weather.

For the gallery app alone, Bixby is able to carry out more than 200 tasks from launching and closing the camera app to taking and editing pictures and rearranging albums. Linked with the scheduler and internet, it can do basic searches and math.

On KakaoTalk, it can send texts and photos and make free calls while Facebook users can have Bixby write a simple message on their wall, send messages to friends and share photos.

Still, in terms of usability, the Bixby interface requires more work to become simpler and more user-oriented. At the moment every command has to be preceded by “Hi, Bixby,” which hampers the organic and seamless user experience.

With the slim bezel, the display feels wider and delivers more of a cinematic experience when watching video clips.

But a screen protector is a must since the glass screen is susceptible to cracking.

While waiting for a case to be delivered, one of the reporters dropped the phone three times; the screen cracked twice.

Pictures from the Galaxy S8 didn’t disappoint. The wide aperture on the lens allows users to get clear and well-focused with more light getting into the sensor. Its interface is simple and easy to use.

The S8’s front-facing camera always delivered better than expected results with an 8-megapixel sensor and improved face detection for autofocus.

The Galaxy S8 camera is fitted with a novel Bixby-related function called Bixby Vision. It boasted the impressive ability to find similar products or images on the web from photos taken.

It got the right result when we photographed Burt’s Bees lip balm, snacks and electronic devices.

Still, Bixby Vision sometimes produced comical results, especially if the shape of an item was less rigid such as clothes or plants.

It can also read text within images caught by the camera and then translate those words into calendar entries.

But it failed when the letters on the picture were rounded.

A beast in gaming

S8’s Exynos 8895 octa-core processor makes the phone a beast when it comes to gaming. Along with the high-end hardware, the phone also allows you to increase the resolution setting for better graphics.

For someone who used rather an antique of a smartphone - an iPhone 5S - switching to an S8 was a breakthrough when playing the latest games such as Lineage II: Revolution by Netmarble.

It isn’t fair to compare an iPhone that is more than four years old with the S8, but playing Lineage was a hassle on the iPhone with the game freezing and stuttering.

With the S8, it didn’t take more than an hour to realize the days of frozen screens were behind us. There was no lag between input and output on the screen.

Not all games, however, are fit for the infinity display and when we launched some older games such as Cookie Run, a big chunk of display on each side of the phone went wasted.

The iris scanning function, a biometric verification system, shines particularly in mobile banking, although some hackers reportedly tricked the system to unlock the phone recently.

The scanner can detect the user’s iris even with sunglasses on or at night in a dark room. But when it is sunny, all the sunlight absorbed into the scanner makes it impossible to detect irises.

Other than unlocking your phone, the iris scanning function is also adopted into the mobile banking functions of Korean commercial banks.

With an iPhone, it took about five steps to wire money on KB Kookmin’s banking application without the use of iris scanning. It went from logging in and entering the transaction details, then the app required us to wait for a phone call from the automated service and enter a one-time password. The next step was to put in designated numbers from a security card issued by the bank before putting in the password for the authentication certificate again to finalize the transaction.

This process, however, was condensed dramatically with the biometric authorization.

All we had to do with the S8 was to log in with our irises, type in the transaction info and verify the transaction through iris scanning. There was no need for the security card, nor did we have to enter the authentication certificate password. This was a lot more convenient than trying to use the imperfect Bixby.

S8 isn’t the first Galaxy embedded with a healthcare app. S-Health was also installed in the previous models, but the company changed the name of the application to Samsung Health, claiming that “it’s not just the name that has changed but the complexity of the service.”

The company said the new application makes it more enjoyable to exchange and share exercises with friends and others. However, for us, it was the activity tracking system that proved far more useful.

We set 6,000 walking steps as a daily goal and saw the app counting our steps throughout the day. It became a different ball game once we started running.

While on the run, the phone automatically recognized and differentiated itself from regular walking apps based on the speed of the movement. It then tracks the distance and time of the exercise automatically.

But when we tried to track other exercises involving weights, such as the shoulder press, the app became useless. Anyone who’s done any weight training knows that reps and weights are more important than the duration of each set, which Samsung Health doesn’t help you track.