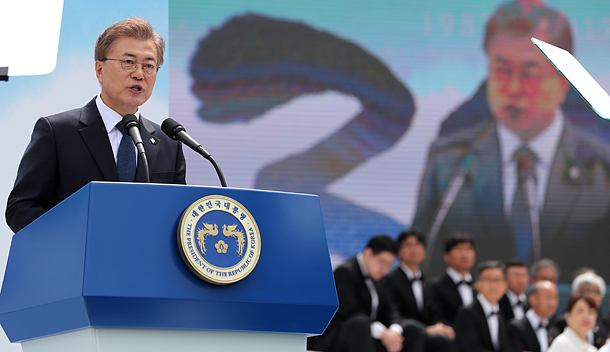 President Moon Jae-in makes a speech during a ceremony to mark the 30th anniversary of the June 10 pro-democracy uprising at the Seoul Plaza on Saturday. [YONHAP]

President Moon Jae-in said Saturday he will not let democracy falter or backtrack in honor of those who risked their lives to safeguard it.

“Under the Moon Jae-in government,” he said during an address to mark the 30th anniversary of the pro-democracy uprising in June, “democracy will flourish and human rights will be further protected.”

In June 1987, a nationwide movement against the dictatorship of the Chun Doo Hwan government took place, triggered by the state’s ruthless crackdown for years on the public’s yearning for democracy, including the death of student protester Park Jong-chul.

The movement eventually led to the June 29 Declaration, which included an amendment to the Constitution to have a direct presidential election, a watershed moment for Korea’s democracy. “The power lies within the people,” Moon said, “and the government will work hard to make sure that the authorities will neither monitor nor suppress people’s thoughts and will.”

At the ceremony, which took place at Seoul Plaza, he put forward “economic democracy” as a new challenge for the government.

“Extreme income and wealth inequality are threatening our democracy,” he said, adding that the lack of job opportunities is the root of the problem. “Job opportunities are not only an issue of our economy but also that of democracy.”

Since solving the issue can’t be done by the government alone, the country should reach an agreement on a new standard for economic democracy, he said.

“Taking this opportunity to honor the 30th anniversary of the pro-democracy uprising in June, I reassure you that our future lies in a social consensus on how we make concessions for others, share the burden together and narrow the level of inequality,” the president said.

Acknowledging the difficulty of the challenge, he called on every party to actively participate in the discussion to cope with it.

Moon became the first incumbent president to attend the ceremony since late Roh Moo-hyun did in 2007.

“For the past 30 years,” Moon said, “all the developments and progress that our society has achieved are based on the pro-democracy uprising… And the Moon Jae-in government was able to take power against the backdrop of such achievements by the people.”

The president gave the people credit for the country’s flourishing democracy by citing every historic grassroots democratic movement, including the recent month-long peaceful protests to oust former President Park Geun-hye. As one of the protesters who participated in the June 10 movement, Moon said he learned democracy becomes the strongest when its spirit is passed down to the next generations “like running water.”