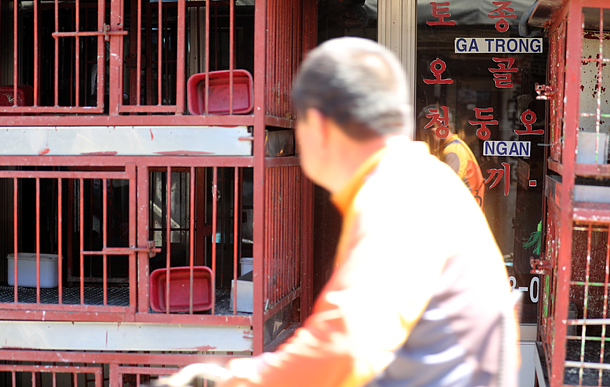 Cages that used to contain live poultry at Gyeongdong Market in Dongdaemun, Seoul, were emptied on Sunday after the government decided to ban any trading of live birds as bird flu continues to spread despite officials’ efforts to contain the outbreak. [YONHAP]

The government is banning the distribution of all live poultry for the next two weeks in the hopes of preventing the avian flu outbreak, which has already affected 15 farms nationwide, from spreading further.

The Ministry of Agriculture, Food and Rural Affairs on Sunday has decided to step up its ban on live poultry exchanges to all the places that treat live birds, whether chickens or ducks, until June 25. On June 5, the government barred the buying and selling of poultry at traditional markets and restaurants that butcher the birds themselves.

But despite this, bird flu has continued to infect smaller farms. The government suspects merchants, acting as middlemen in the distribution process, may have caused the virus to spread. Starting today, the government will begin investigating whether merchants are licensed and have followed safety procedures.

According to the government, two more farms were infected over the weekend, raising the number to 15, all of which became infected in just one week.

Among the areas involved, Jeju has six infected farms, the largest number of all, followed by Ulsan with three and Busan and North Jeolla with two each.

The government held an emergency meeting on Sunday chaired by Prime Minister Lee Nak-yeon, who called on the government to stay alert.

“The fact that the avian flu in Gunsan [North Jeolla] happened because of a middle-merchant and not from a direct purchase means that the quarantine system is not working,” Lee said during the meeting. “There are no cases of the H5N8-type avian flu affecting people, but we are not certain, so there should be extra care taken by the people working on the quarantine.”

As of Saturday, over 18 million birds have been buried at 179 farms across the country as a preventive measure. Additionally, 34 areas are suspected to be infection sites.

The recent outbreak, which usually only happens between winter and spring, is expected to once again drive up the prices of poultry and eggs.

According to the Korea Agro-Fisheries & Food Trade Corporation, the average retail price of 30 eggs as of Thursday was 7,967 won ($7.07), which is 77 won, or 0.97 percent, higher than last month. However, when compared to a year ago, it is 50 percent higher.

Some stores in Seoul have been said to sell the same number of eggs for nearly 10,000 won. In the first two months of this year, due to one of the worst bird flu outbreaks in history, the country was faced with an egg shortage that resulted in the government importing eggs from the United States for the first time.

There are already growing concerns over rising inflation, particularly the prices of food products.

Last month, consumer prices grew 2 percent compared to a year ago. However, the price of agricultural, livestock and marine products grew 6.2 percent, the sharpest since January’s 8.5 percent.

Livestock alone has risen 11.6 percent, the sharpest in three years — the last time livestock prices have risen this much was in June 2014. Chicken prices were up 19 percent.