More children are contesting their inheritances

More children are contesting their inheritances 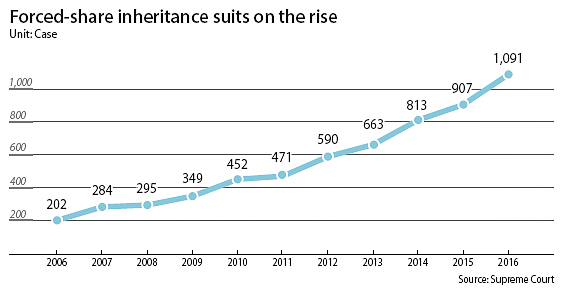 Parents on average give nearly nine times more in inheritance to a favored child than to other children, according to a study conducted by the JoongAng Sunday of 107 litigations over the past year.

The 107 cases were brought by legal heirs. Under the law, legal heirs are entitled to at least half the amount they would have received had the inheritance been equally divided.

But in most cases, it was revealed that parents often give far more to first sons, or sons over daughters, a custom influenced by the fact that first-born children or sons usually bear the responsibility of caring for their parents. With growing gender equality awareness and the advancement of women’s role in society, an increasing number of daughters are taking their dissatisfaction to the courts.

“The disintegration of families by such inheritance lawsuits is getting worse year after year,” said Jung Yong-shin, a judge at the Seoul Family Court, “and during the course of the legal battle, family relationships reach rock bottom.”

The JoongAng’s analysis into the 107 cases revealed that, on average, parents gave 2.73 billion won ($2.45 million) to defendants and about 200 million won to plaintiffs.

“When I consult with parents who come to see me to leave a will, most say they definitely have a child they favor more,” said Koo Sang-soo, an accountant of law firm Jipyeong and an author of the book “War of Inheritance.”

“It is true that daughters outnumber sons as inheritance litigation plaintiffs,” said lawyer Lee Hyun-gon, a former family court judge. “When sons raise lawsuits, they are mostly second or third sons [contending for fair share from their older brothers].”

When facing such lawsuits, 16.8 percent of defendants said the inheritance belonged to them in the first place, claiming they had paid for property in their parents’ names when they were alive and received repayment in the form of inheritance.

In one case, which was ruled by the Seoul Central District Court in May of last year, four siblings filed a suit against their older brother, claiming their share of a real estate property worth 500 million won that their father, who died in 2014, left to the first son in 2003. The defendant countered that he had in fact paid the totality of the land’s value in 2003, but the court ruled against him, citing lack of evidence. The court ordered 53 million won to be distributed among the four plaintiffs.

The law on forced portion of inheritance was enacted in 1977 to prevent family disputes due to unequal inheritances, which were much more common in the 1970s and 80s.

While the law has been in place for 40 years now, not many people filed suits because of Korea’s patriarchal society and because first sons often bore the brunt of responsibility for taking care of parents.

But over time, an increasing number of people are seeking legal solutions to what they perceive to be unfair inheritances. In fact, the number of such lawsuits jumped from 69 in 2002 to 1,091 last year.

After a man surnamed Kwon died in 2015, he left behind a will, certified and approved by family members in 2006, in which he gave his land in Seoul’s Gangnam District to his first son. The late Kwon had his daughters write a joint statement vowing not to challenge his will. Nevertheless, the daughters took the case to court after Kwon died, as the land was worth 4.9 billion won and won the case in accordance with the 1977 law.

Experts say during the course of these legal battles, it is not uncommon to see people cut ties with their relatives for good. They also say it is important for parents to raise their children in an equal manner to prevent future legal fights. At least, they should try to give wealth evenly among their children in a way that meets the criteria of the 1977 law.

“If a parent unevenly gives wealth to one particular child, he or she should make sure that the other children will also get a fair share above the legally required level,” said Byun Hee-chan, a lawyer at the law firm Seojong. “And even if they decide to donate all their wealth to society, they must consult with their children before making their decision.”

“The best thing for parents to do,” said Woo Byeong-chang, professor of law at Sookmyung Women’s University, “is to teach their children how to fish and give the fish they themselves have caught to the poor.”