Rural areas suffer from a shortage of capable nurses

Rural areas suffer from a shortage of capable nurses 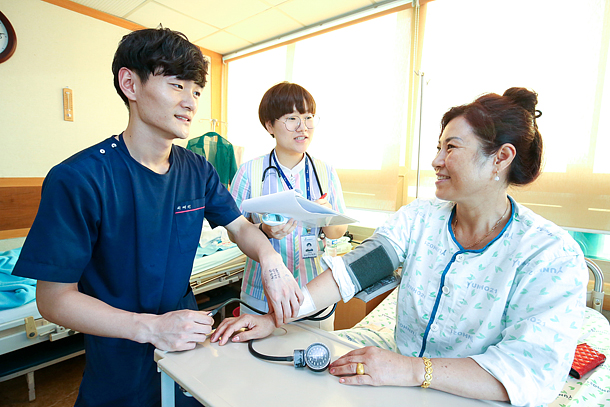 Two paramedics check the blood pressure of a patient at the Yoonho21 Hospital in Goheung County, South Jeolla, on June 1. The hospital hired paramedics in place of licensed nurses due to a shortage of nurses. [JANG JEONG-PIL]

At one such hospital, Yoonho21 Hospital in Goheung County, South Jeolla, a 24-year-old paramedic surnamed Choi was checking on patients on the afternoon of June 1.

“How do you feel?” Choi asked a patient as she checked the chart. A 38-year-old nurse surnamed Hwang was also checking on patients in the ward. As Choi helped a 77-year-old woman suffering from pneumonia to the bathroom, another patient at the ward raised her voice, asking, “Can you please help me with this?”

There was only one female nurse and one female paramedic on the fifth floor of the building that day, taking care of the 58 patients on the floor. In fact, to care for the hospital’s 140 patients that day, there were 21 paramedics working around the clock in and out of the emergency room to assist its 15 nurses and 15 nurse assistants.

“The nurses and paramedics are divided into three groups to take care for the patients 24/7,” said a 27-year-old paramedic surnamed Heo. “But we’re out of hands and often we are divided into two teams for the shifts throughout the day. Some hospitals don’t like to hire paramedics to carry out nursing duties because a lot apply to fire departments in two years or so.”

He added, “But without us paramedics, the hospital cannot run.”

Hiring a paramedic to perform a nurse’s job is a legal grey area, according to the Ministry of Health and Welfare.

“We had 44 full-time nurses before, but now we have one-third of that,” said Lee Yoon-ho, director of the Yoonho21 Hospital. “Even as we raise the pay 6 to 10 percent every year, it’s become difficult to recruit nurses in rural areas. At this rate, we may have to close down the emergency room, or even the whole hospital.”

The situation is no better at a nearby hospital in Wando County. Daesung Hospital, the only hospital in the county, saw three of its nurses suddenly quit in February and March. It recruited three paramedics and even asked retired nurses in the area to help out during the day. On the morning of June 2, a 56-year-old head nurse was checking on the patients there when two drowning victims arrived. She ran to perform CPR, but did not revive them.

“I am the only nurse during this shift who can do CPR,” said the head nurse, who asked not to be named. “Not a lot of nurses want to come to rural areas because the working conditions are not easy. So if we can have a new recruit who can help out for just six months, we would be thankful.” 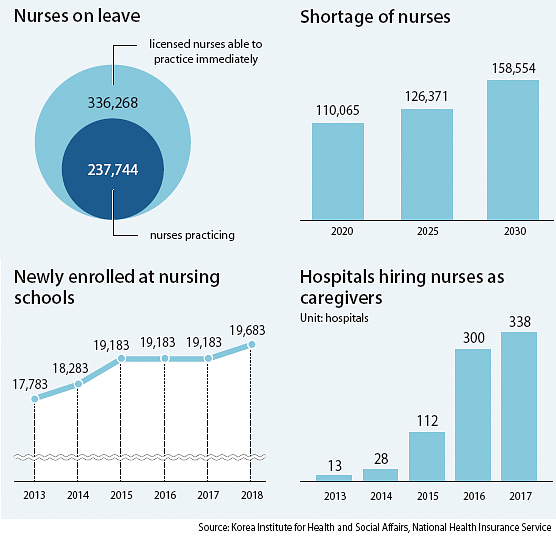 “We are aware of the dearth of nurses and are discussing the matter internally,” said an official of the Health Ministry, “but it’s difficult to reach a consensus with other ministries to push forward policies to expand student enrollment at nursing schools.”

“Perhaps nurse assistants could be hired on as nurses at smaller hospitals or nursing homes where they are in dire need,” said Park Hye-kyung, director of policy and strategy at the Korea Hospital Association. “In Japan, nurse assistants are granted a nursing license after they have a certain period of practical experience under their belts.”

“It’s important to help more female nurses to come back to work after their maternity leaves,” said Baek Chan-gi, PR director at the Korea Nurse Association. “And policies must be made so that hospitals in rural areas can hire male students at nursing schools as temporary nursing aides.”