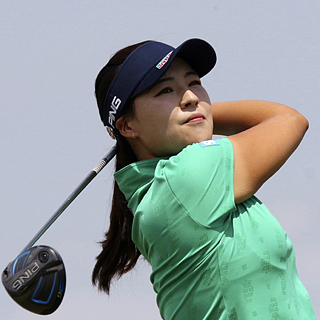 Chun In-gee came up short of winning a tournament once again, losing in a three-way playoff against Ariya Jutanugarn of Thailand and Lexi Thompson of the United States, at the Manulife LPGA Classic at Whistle Bear Golf Club in Cambridge, Ontario, on Sunday.

During the final round, Chun teed off in a group with Jutanugarn, the second-to-last group. Up until the 14th hole, Chun shot an even-par, with two birdies and two bogeys. Then with back-to-back birdies on the 15th and 16th holes, Chun ended up shooting two under-par on the last day, to tie the lead at 17-under with Jutanugarn and Thompson.

On the 16th hole, par-five, Chun got it on the green in second, sticking it as close as 10 feet from the hole, but missed her eagle putt and had to settle with a birdie.

Thompson, who was the leader after the third round, had quite a roller-coaster, leading the field in the front at 20 under-par, but finishing the round at 17-under par, three-over in the back nine, to force a three-way playoff.

The tournament finally came to a conclusion in the first playoff hole with Jutanugarn’s birdie.

Chun hit both fairway and green in regulation but missed her birdie putt to finish with par. With another runner-up finish, Chun missed her chance to win a tournament for the fourth time this season. Unlike the other three runner-up finishes, this time she got close to winning, missing her chance in the playoff.

“I think we’re almost there,” Chun said after the playoff, as quoted on LPGA.com. “Everything is good.”

Considering Chun’s missed cut in the previous event at LPGA Volvik Championship, a runner-up finish wasn’t that bad. But looking further into her seasonal record, it’s about time for Chun to win a tournament. Out of the 11 events she played in throughout the season, Chun had six top-ten finishes and missed two cuts. Out of the 41 tournaments Chun played in since her LPGA tour debut in 2016, this was Chun’s eighth runner-up finish.

Meanwhile, Jutanugarn’s victory means she is now the new No.1 golfer in the Rolex World Ranking, replacing Lydia Ko of New Zealand’s spot, which she maintained for 85 consecutive weeks.

“I just can’t believe I won the tournament,” Jutanugarn said after the round, as quoted on LPGA.com. “When I got here, I didn’t feel comfortable to hit the golf ball and [was] scared to hit my tee shot.”

It was a long awaited victory for Jutanugarn, as she had three runner-up finishes already this season. And the victory has given Jutanugarn more than the No.1 spot in the world, but also makes her the new leader in the season-long Race to the CME Globe, finally improving her playoff record to one win and two losses and capturing her sixth LPGA tour victory.